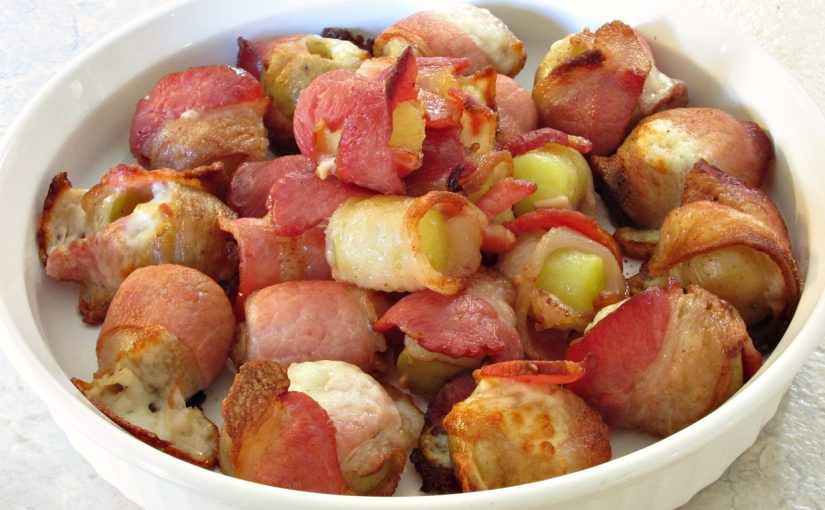 A Potato Bomb Mini’s are BOMB!

If you are unfamiliar with this recipe or you’ve never seen or heard of a Potato Bomb before, you’re in for a real treat..  These are usually made from a full sized Russet Potato and they are great at barbecues.  But these little Mini’s can be served anywhere.  You can make as many as you want for an appetizer, snack or just stack them high, on a party platter, and watch them disappear.  And, because they are so simple and easy to make, you don’t need much of an ingredients list.  It’s basically just Bacon, Cheese and little Waxy Potatoes.  Every potato gets cheese, bacon, a little salt or creole seasoning if you want some spice, and some olive oil to make it all stick. A Potato Bomb is normally made from a large Cored Russet Potato, stuffed with Cheese and wrapped with bacon from end to end, before it’s baked or barbecued.  The name, “Potato Bomb” derives from two things.  First, they look like grenades or bombs.  Second, it’s just a part of today’s lingo.  When someone says, that’s the “Bomb”, they mean it’s amazing and that’s exactly what these are; amazing little Potato bombs.

Oh, and if you’re interested in Restaurant Style Salted Bake Potatoes or another Bite sized Bacon and Cheese Recipe called Cheese Bombers, I highly recommend you click the links.

Be sure to watch the short video tutorial and I’ll show you exactly how to make these fun and tasty Potato Bomb Mini’s.