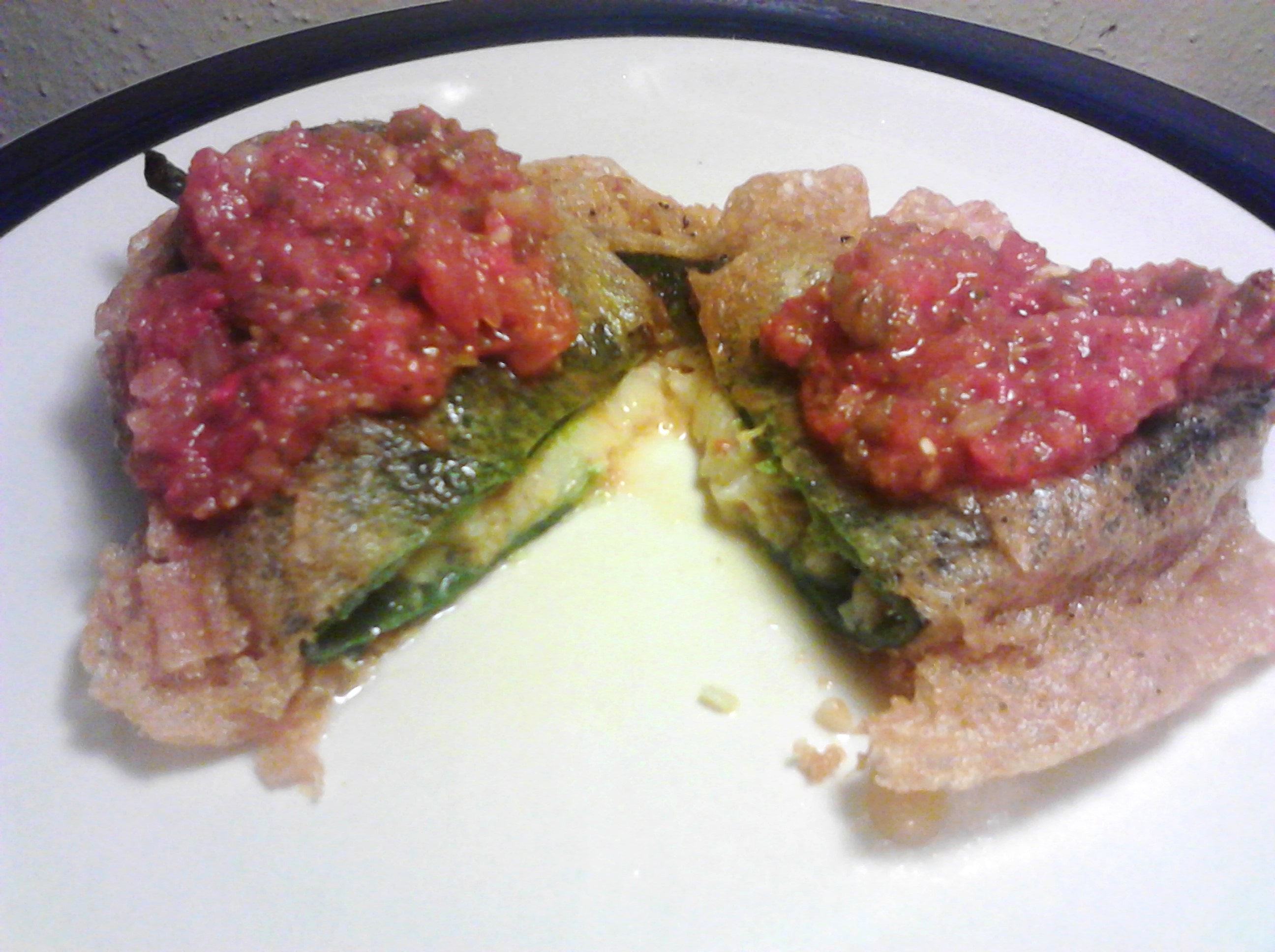 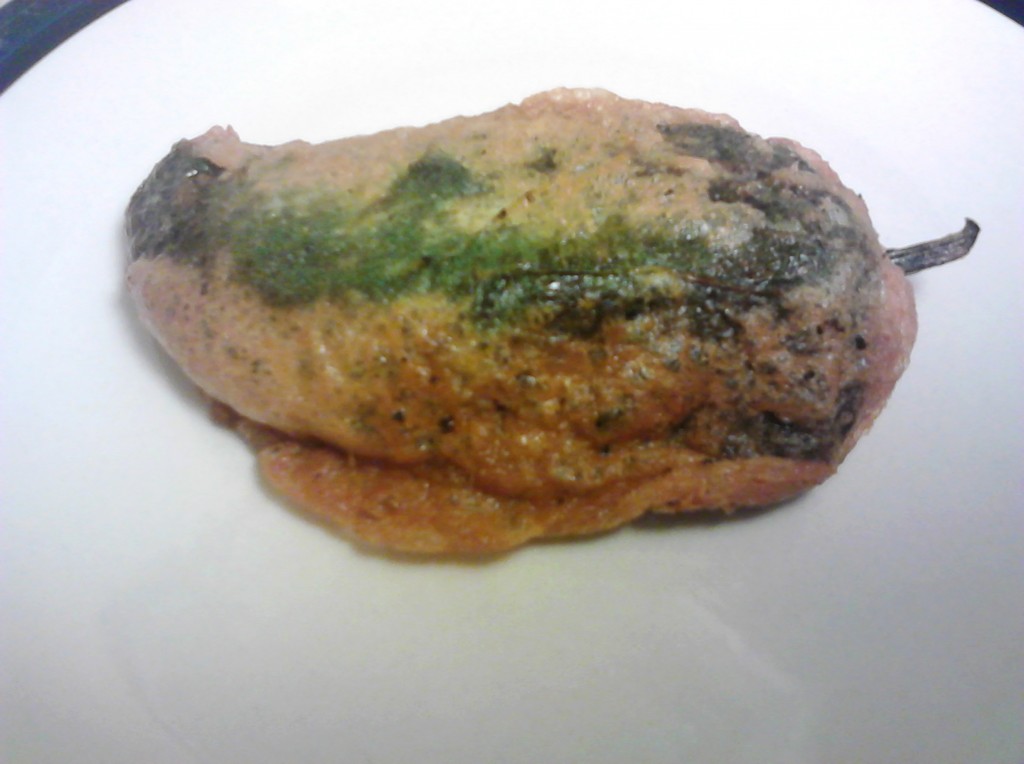 Chili Rellenos are so good, and so easy to make

I’ll admit that my Chili Relleno Recipe can be a little bit tedious the way I like to make them, but they are most certainly well worth it.  I like to stuff them with a lot more than just cheese which for me makes them taste so much better than just a battered chili.  This recipe I use Spanish rice which I prepared just before I started broiling the chilies, but I believe you can stuff them with any of your favorite cooked meats.

This Chili Relleno Recipe requires just a few items that you can get from any regular grocery store.  Of course the number one priority on your list should be some large green Chili’s.  The only other item’s you’ll need is some jack cheese, eggs and some Spanish rice or your favorite meat.  I think you could stuff these chilies with more vegetables if you like and they would be fantastic; maybe some spinach, or tomatoes, or even some sautéed zucchini; all of the above even.  Get creative and don’t be scared about it.  The best thing I think you can always do when you follow someone else’s basic “how to guide” with their personal take on a recipe is to take it with a grain of salt; meaning, you should realize that yes they may have some good experience cooking what they’re teaching about but what they are teaching is also based on their own personal tastes as well.  So when it comes to any recipe you make, I strongly encourage people to improvise and throw in items that are personal favorites.  I’m not saying you should get crazy and change out the seasonings and the overall preparation of the recipe, especially if you’ve never made anything like it before.  I’m just saying that if you know for sure that you would possibly prefer vegetables over meat for example, then swap it out and go for it!  Especially when it comes to this Chili Relleno Recipe Okay, enough said! 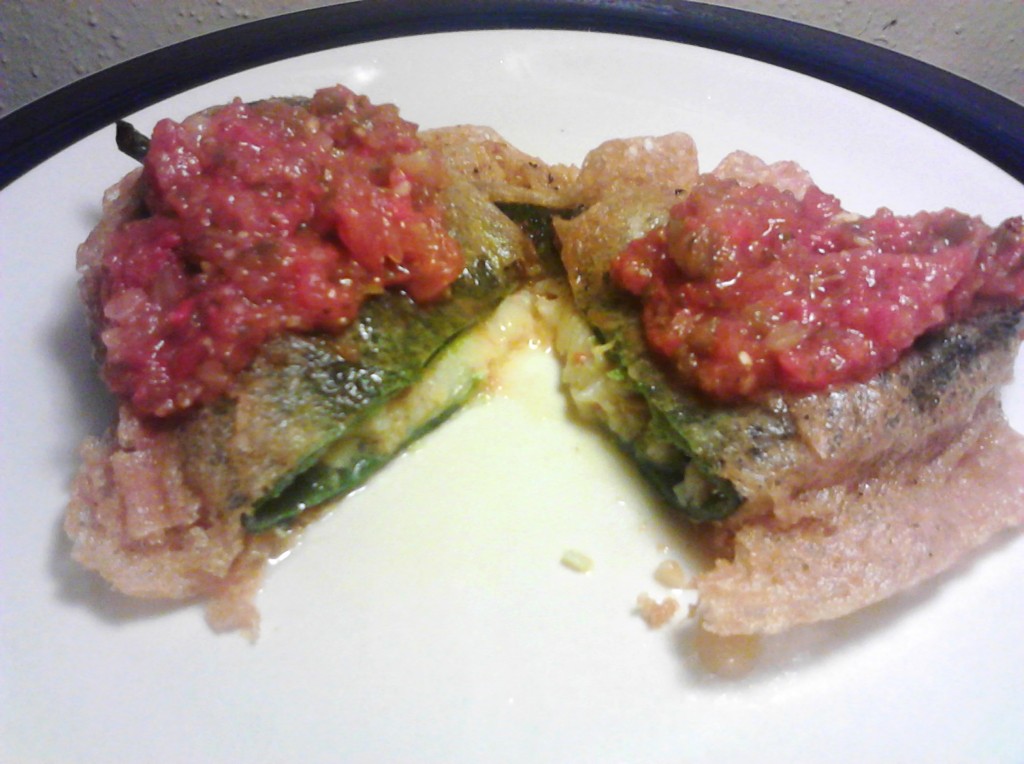 Now the best way to start any Chili Relleno Recipe is of course with your Chilies.  Wash them, clean them and get them ready for a broil in the oven; or if you would like to take it a step further, throw them on a grill.  It doesn’t matter really.  You’re just going for the general desired color and texture of a fired cooked Chili.  Just make sure which ever you decide, you give them a turn now and then to make the coloring even on every side.  In the oven, I turn them every 2 minutes or so.  After you’ve cooked them evenly, pull them out and throw a moist towel over them so the chili can soften up a bit.  5 to 10 minutes is all it will take.  Then make a small incision in each one of the Chilies and stuff each one with only enough rice and cheese to be able to close back with a partial flap.  This will ensure that there isn’t any spillage.  At this point you can pull the seeds out as well if you’ve got your mind set on all of the tedious pet peeves of traditional authenticity, but if your not trying to impress the President of the United States, I’m pretty sure you can live without doing it.  Traditionally you’re also suppose to peal the skins off at this point, then you roll them in flour and dip them into the egg mixture and fry.  Just so we’re clear, I don’t peel skins.  I think it’s pointless and it adds a chard effect to the flavoring of the Relleno.

When it comes to the egg mixture, you’re going need to separate the yokes from the whites, and blend the whites separately with a little bit of water and baking powder to make the eggs frothy.  Then slowly add the yokes one at a time, all the while mixing the eggs on high speed.  This is very important.  The yokes have got to be very frothy and bubbly or the batter is going to run all over the place when you drop the chili in the fryer.  All you have to do from here is dip and submerge one chili completely in the egg mixture ever so gently to ensure the flap doesn’t open and dump out the filling, then slowly add the chili to the hot oil in your fryer or your pan with oil.  Oil in a pan doesn’t need to be more than one inch, and once you’ve browned one side just flip it over to the other and do the same.  Then strain on to some paper towels and serve.  Hope you enjoy my Chili Relleno Recipe!

One thought on “Chili Relleno Recipe”