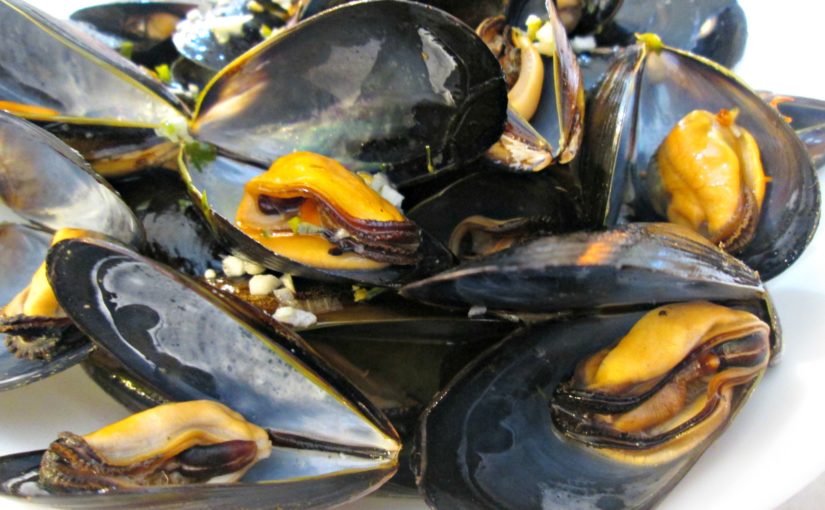 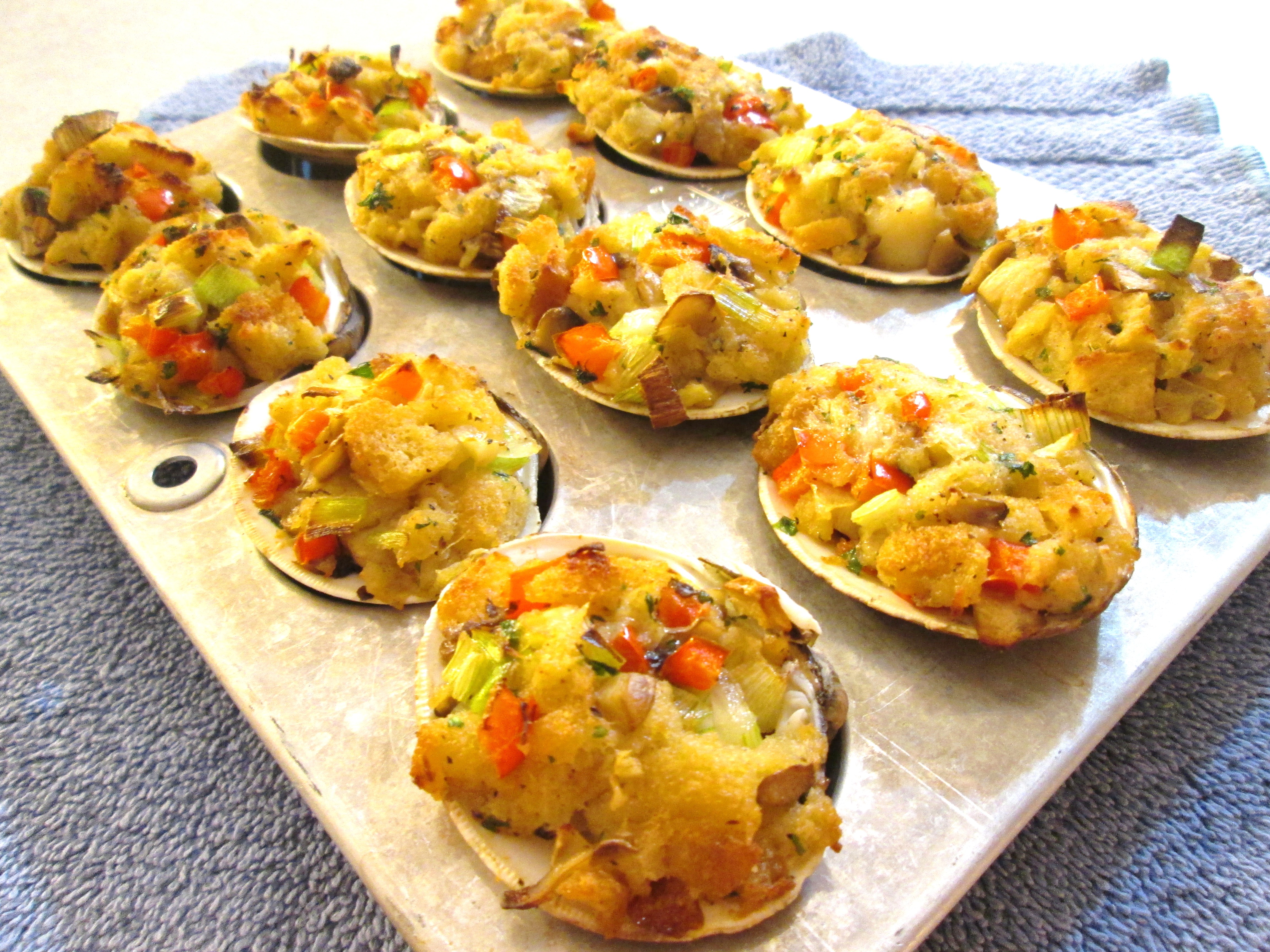 If you’re looking for a recipes for Stuffed Clams, that meets all of your expectations, then look no further.  In this recipe you are able to get twice as much for less because both sides of the shells are used.  By cutting every individual Clam in half and adding in Bay scallops, you increase the meatiness of the clam and, at the same time, spread the wealth and abundance of the mix by stretching the recipe to both halves of the shells, instead of just one.  Combining key ingredients with the breading makes this journey a success because everything is very well balanced in flavor. Here’s a few things you should know when you’re preparing Stuffed Clams.  You shouldn’t ever cook and eat already dead clams.  How do you know if they’re dead or not?  The myth is, if the shell is open, prier to cooking, the clam is dead.  This isn’t necessarily true.  Some times those little Clams are just peaking.  So what I like to do is run them under cold water first, give them a quick rinse before I check for dead clams.  Any clam that is still alive will close under the cold water rinse and you will know for sure which ones to toss out.  Also, some folks like to trim out the crap shoot of the clam.  This is completely optional, it’s not necessary and it’s completely to your discretion.

This recipe calls for Clam Juice, which you can buy bottled, but all I use is the left over stock from the boiling of the clams and you should too.  I currently have the most popular Steamed Clams video recipe on YouTube and I use the broth as part of the ingredients as well because it has so much flavor left from the liquor secreted from the clam shells.  You also might want to look into my recipe for Mussels in a Garlic Lemon Butter Broth, because it is also to die for!

Be sure to watch the short video tutorial for instructions to make perfect Stuffed Clams. 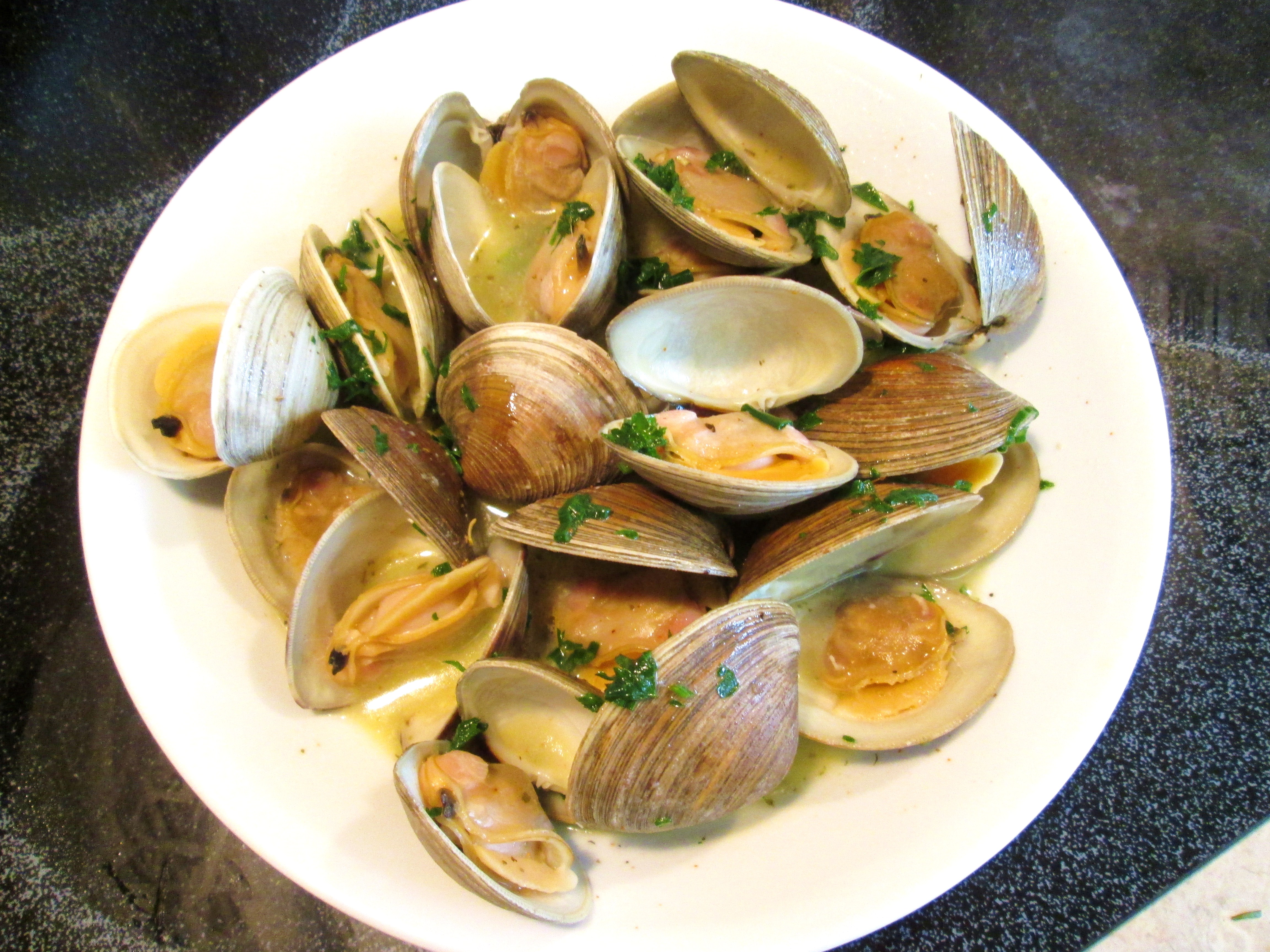 For me, Steamed Clams have turned into a fun and exciting dish to snack on.  It really has that jaw dropping ooh and awe effect on people who really appreciate a whole plate of them when they hit the table.  These are Little-Neck Clams and for me, they have a very impressive and distinct taste.  Not to mention they are fun to cook.  Steamed Clams are an excellent appetizer, even if the dinner guests don’t particularly care for shellfish or seafood.  Can you guess why?  Take a look at this picture below.  It’s impressive, right?  Of course right.  So whether or not you get the credit you deserve for making such a scrumptious and tasty treat, at least you’ll get points for being eccentric.  This particular recipe couldn’t be any easier either.  All you need is 10 minutes and a few ingredients and you are off and running.

If you’re worried about the sand in Clam Shells and how to get rid of the Grittiness, there are several things you can do.  First off, the Clams I used in this video were Farm raised.  So if you are using these, you don’t really have to worry about the sand because they’re always cleaned out before they are shipped off.  Secondly, if you haven’t watched the video yet you’ll see that these Little-Neck Clams are rinsed and washed off before they are Steamed.  So consider that before you ponder your options.  If they are wild clams, just give them a soak in cold water for approximately 20 minutes.  I do the same thing with Crawfish only I cover them with salt so that they can purge.  Both clams and Crawfish spit out the muddy sand they’ve ingested as part of their daily diet.  You can also give them a real quick rinse after they’ve been steamed.  This helps to cut down on the Grittiness, if there is any.   And if you’re worried about it in the leftover Clam juice I turn into a Clam Salsa in this recipe, you can cheese cloth and strain the juice just before adding the other ingredients.