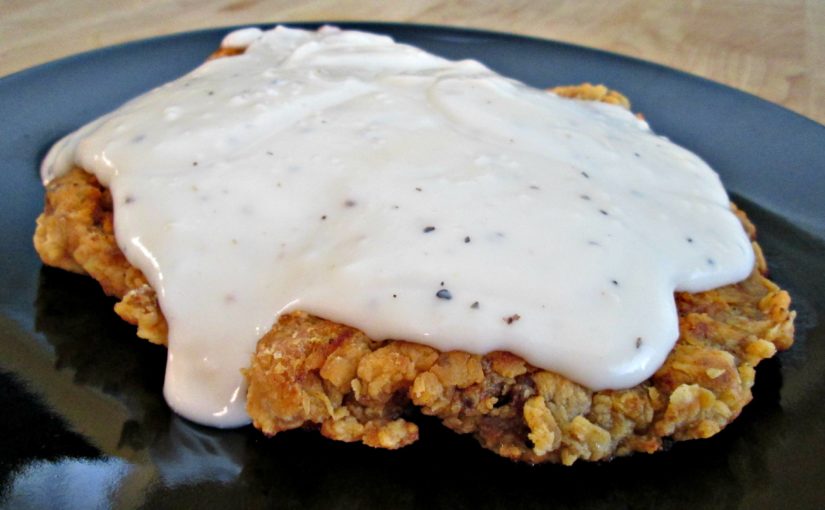 A few years ago I ordered a Chicken Fried Steak from a restaurant in Gillette Wyoming that was, absolutely, out of this world. I went and re-ordered that dish several times, before I packed it in and left town, and I hadn’t had one that good since. That is until I stopped in to a little mom and pop’s diner hear in town and decided to take a stab at their version. Wow! It was delicious and it’s weighed down on my mind so heavy that I decided I better show the world how to do it your self and guarantee amazing results.

As you may or may not know, there isn’t just one way to make Chicken Fried Steak. There are several different ways to do it. Among the most common is your basic Cube Steak or, the poor man’s version, with hamburger. In this recipe, however, I’m going to suggest using fat trimmed Ribeye steaks cut about 3/8 of inch thick. Starting out with the right cut helps to insure tenderness with a rich flavor. Then tenderizing and seasoning takes it to the next level.

Now that we’ve learned using a Ribeye is one of the secrets to making a great Chicken Fried Steak, now we need to talk about the seasoning. In my opinion, anything beef related needs a good rub with something salty, spicy and very flavorful. Blackened seasoning has got it all but it isn’t always available in standard grocery stores. I have to make my own and I’m going to show you how to do it in the next post. So, you’re not going to want to miss that. Blackened seasoning is amazing on steaks, ribs, chicken and seafood. It’s one of those all around seasonings that’s good on just about everything and it’s especially good in this recipe. Now all you’ll need is some flour, a simple egg wash and some country gravy. 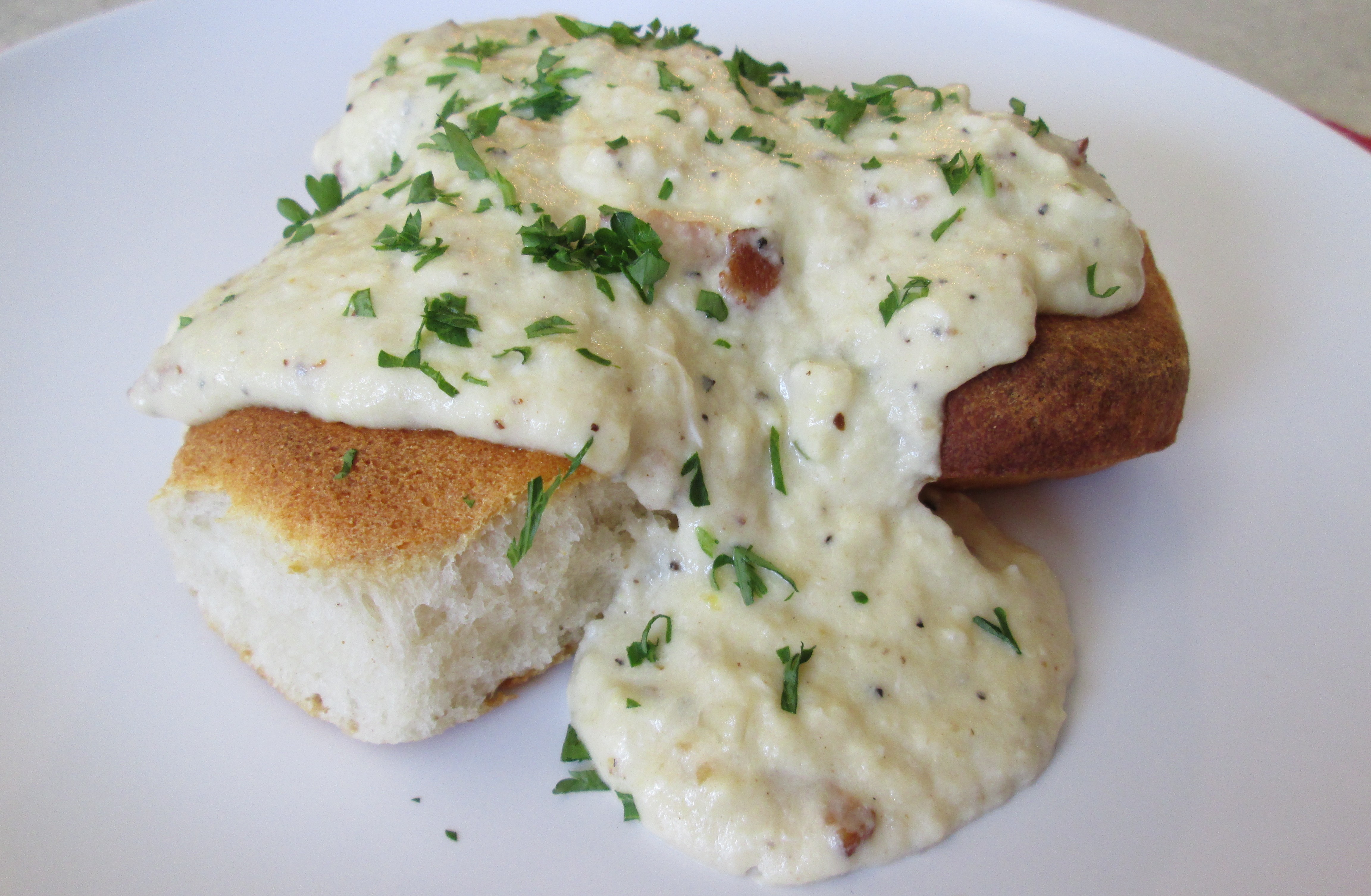 
Slice your bacon into 1/4 inch pieces and chop the Green Onions into Scallions.  Over medium high heat cook the bacon thoroughly, then add the onions.  Separate the bulk from the bacon grease and add the flour to make a Roux.  Once it becomes thick and darkens a bit, add the milk a half cup at a time.  Bring the gravy to a light boil before you add each half cup and whisk the clumps of flour that thicken in the milk until the mixture becomes smooth.  Go back and forth like this until the milk is gone, then add the eggs.  Once you’ve stirred in the eggs and they are cooked add the cream and simmer until it thickens for the last time.  Serve Egg Gravy over Hand Torn Pieces of toast or your favorite biscuits. 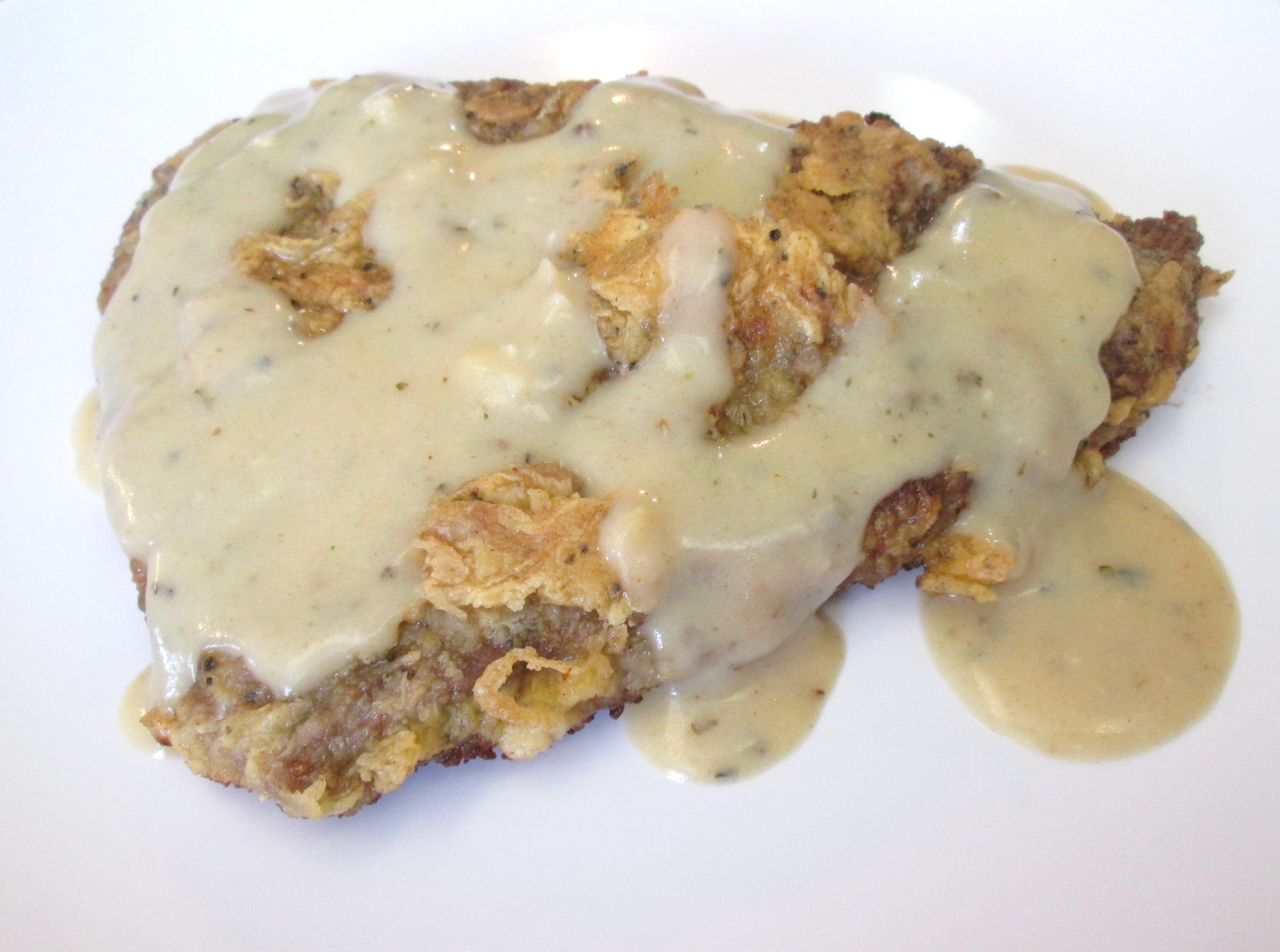 Don’t you love a good Chicken Fried Steak?  I use to order it every time I ate at this restaurant in Gillette Wyoming, on my way to Deadwood South Dakota.  The Restaurant was Called Humphrey’s if I remember right; had a big Camel as their Logo.  If you’re ever going to head up north for Sturgis or to see our Mount Rushmore, I suggest you hit Humphrey’s on the way there.  Just about everything on the menu rocks, but I definitely recommend the Chicken Fried Steak.

Cubed steak is the way to go if your going to make Chicken Fried Steak.  If you don’t purchase Cube Steak already meshed out and you need to do it your self, just pick up a Bottom Round Roast, slice each piece 1/4 inch thick and use a needling device or a tenderizing sledge hammer to just beat the hell out of it.  The 3 1/2 minute Chicken Fried Steak video recipe below will cover everything else, so kick back and enjoy.

Cut your meat portions and tenderize them.  Salt and Pepper Both sides then dredge in the flour first, then in the egg and back in the flour again for a second time.  Let each steak rest for 5 minutes before frying.  Add oil then the steaks and cook 3 minutes on the first side and 2 to 3 on the second side once you’ve flipped it.  Remove the steak and let it rest on a wire rack.  Using the same oil, turn your heat to High and add 3 tbsp of the seasoned dredging flour.  Sometimes you need to add more oil before stirring in the flour if you’r cooking more than a few steaks.  Stir in the flour and make a light tan roux, allowing the flour to absorb the flavor left in the skillet.  Add all of the Chicken Broth and bring it to a boil stirring constantly.  Then add the milk a little add a time until it thickens.  Season with Italian seasoning or Thyme and Oregano.  You shouldn’t need salt or pepper because the broth has the saltiness in it and the dredging flour already had pepper.  Serve your Chicken Fried Steak with The Country gravy, and Mashed Potatoes if you’ve got them!