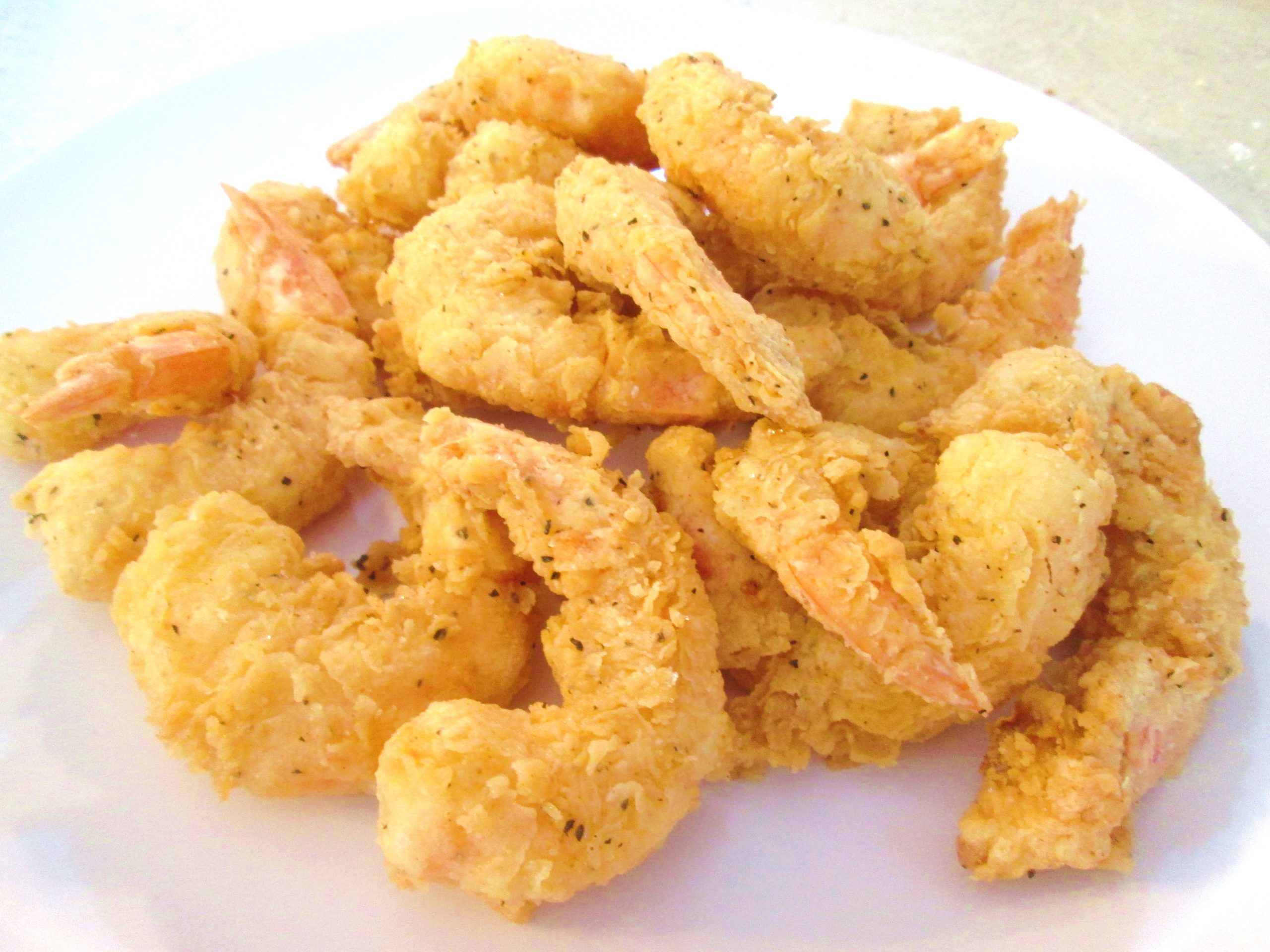 Oh I love me some Fried Shrimp.  Popcorn Shrimp, Jumbo Fried Shrimp or Coconut Shrimp, lay it on me. I won’t complain.  And in all honesty I don’t really have a favorite.  In fact the worst thing for me is the shell peeling and that’s just because it’s tedious.  But, it’s got to be done and it’s really easy to do if you know the technique.  But when it comes to Southern Fried Shrimp, you’r going to want to use a larger shrimp, jumbos even, and you’re going to need to leave on the tail for dipping.

This recipe is very simplistic and very easy for anyone to follow, based on very basic seasonings most everyone already has, right in their own kitchen.  Sure it can be perverted and spiced up like some kind of secret chicken recipe but it isn’t really necessary, unless you’ve just gotta have more kick.  But that’s entirely up to you.  Flour, Salt and Pepper, some Paprika and an egg wash with hot sauce will set your pallet off after you’ve fried these crustaceans!

Oil for Frying (I use Peanut Oil)

Peel and de-vein your shrimp.  Mix all the dry ingredients in one bowl and all the wet in another.  Place the shrimp in the dry ingredients first, then in the spicy egg wash and back into the flour a second time.  Fry at 350 degrees for 5 minutes or until golden brown.  Be sure the oil is hot and don’t over crowd the fryer.  I eat Southern Fried Shrimp with or without cocktail sauce. 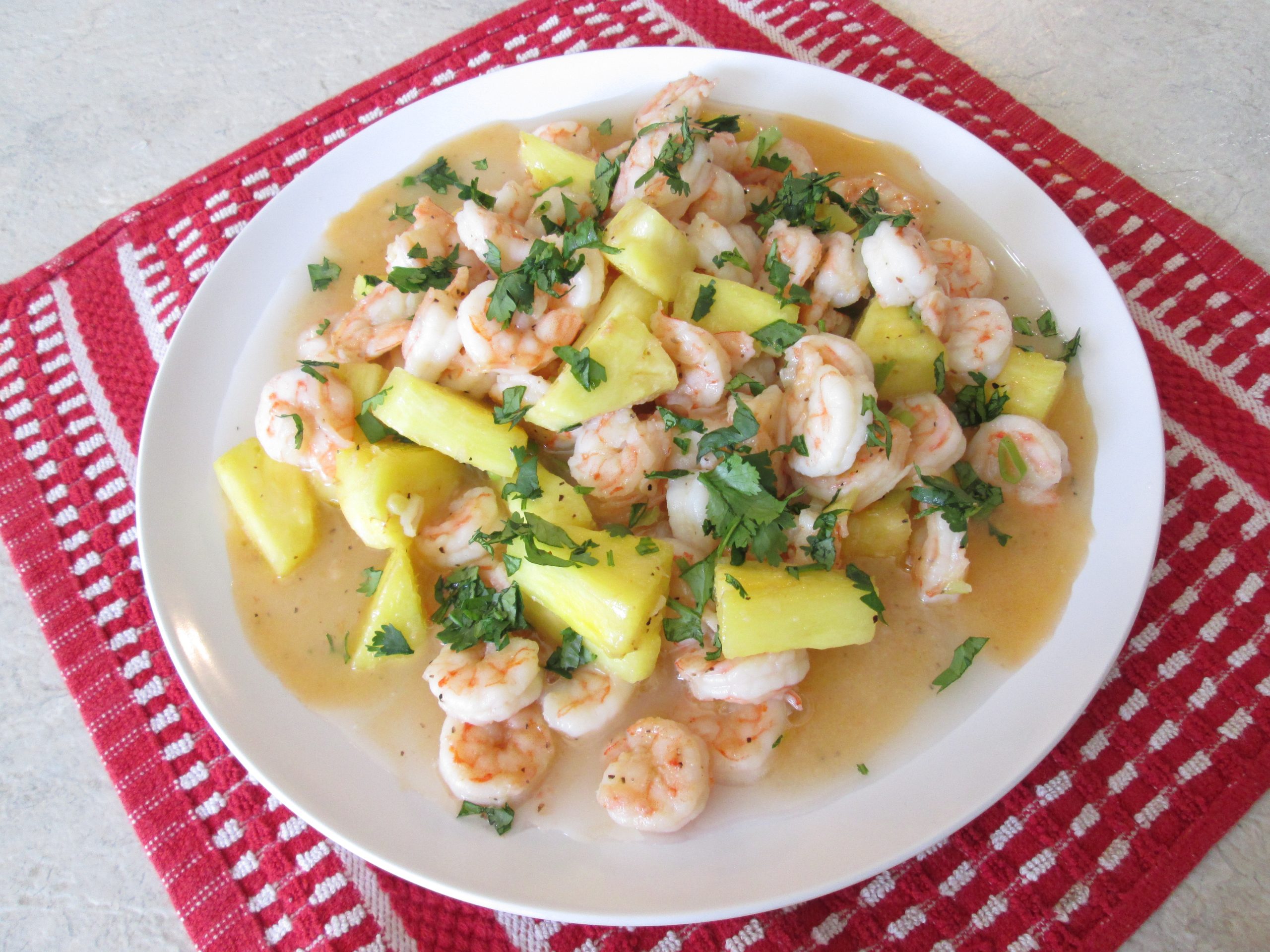 So you’re probably use to having Deep Fried Coconut Shrimp.  Well if that’s what your looking for, CLICK HERE for that recipe.  This Coconut Shrimp recipe however, is sauteed, seasoned and tossed with Pinapple and Scallions.  Is that peaking your curiosity yet?  Not to sound too cliche, but this is one of those recipes where the secret is found in the sauce.  Luckily it comes already prepared for us in a can.  It’s called Coco Lopez. Coco Lopez can be found in one of three places at your local grocer; with the Mixers or in the Asian or Hispanic section.  It is advertised as “Cream of Coconut”, but, nay nay I say.  Coconut cream made by all other brands isn’t anything like the Coco Lopez Brand.  Other brands are more like Coconut Milk, creamy and frothy and you shouldn’t use any of them when preparing this Sauteed Coconut Shrimp recipe.  It won’t turn out at all.  The reason is because Coco Lopez is more of a syrup than anything.  It is concentrated and sweet, not milky or creamy like the other brands.  So it’s really interesting to me that it is referred to as Coconut Cream, or “Cream of Coconut as it reads on the Label.  But don’t let that discourage you.  The only point I’m making is that Coco Lopez is what you want to use when you’re making Sauteed Coconut Shrimp, not other brands or other versions of it because it is not the same thing, at all.  Trust me.  But just for the record, I also use Coco Lopez’s Cream of Coconut when I make Pina Colada’s, and if you’re interested in that recipe, it can be found HERE!

In a large frying pan on Medium High heat, add 3 tbsp of olive oil and the peeled shrimp.  Season with Salt and Pepper and Saute until the shrimp turns Orange and Pink.  Add the Butter, Garlic, Scallions (green onions), and Pineapple to the pan and toss until the butter is completely melted.  Then simmer for one minute, stirring occasionally.  Remove from the heat and plate.  Pour the Coco Lopez over the top and serve your Coconut Shrimp over rice. This Coconut Shrimp recipe is based on the basic Aussie recipe you can find on the menu at just about any Outback Steak and Grill Restaurant.  I wouldn’t dare say that it is their exact recipe but I would definitely argue that it is just as good, if not better because the similarities are uncanny.  And if you’re a fan of the way they cook their prawns, then this is the recipe for you because these are the best.

Most Restaurants butterfly their shrimp and fry them in fresh leafed coconut, and so do I but I don’t use Panko.  I’m not saying that they do but some recipes call for it and I find that it isn’t necessary if you take different steps.  For example, I dip my shrimp in Tempura instead of an egg wash and I make the batter a little bit thicker than usual to assure the coconut stays on the shrimp.  If you do this, instead of dipping the shrimp in egg-wash, you’ll have an easier time frying your Coconut Shrimp and they’ll turn out crispier.  That is, if you follow my Tempura recipe.

Butterfly the Shrimp by cutting a small incision down the back of the spine 3/4 of the way through.  Dip the Shrimp in the Tempura Batter then roll in the Shredded Coconut.  Pan Fry on medium heat with only 1/8 inch of oil in the bottom of the pan for 1 to 2 minutes per side.  Remove the Coconut Shrimp and place on paper towels that can absorb the frying oil, then serve.