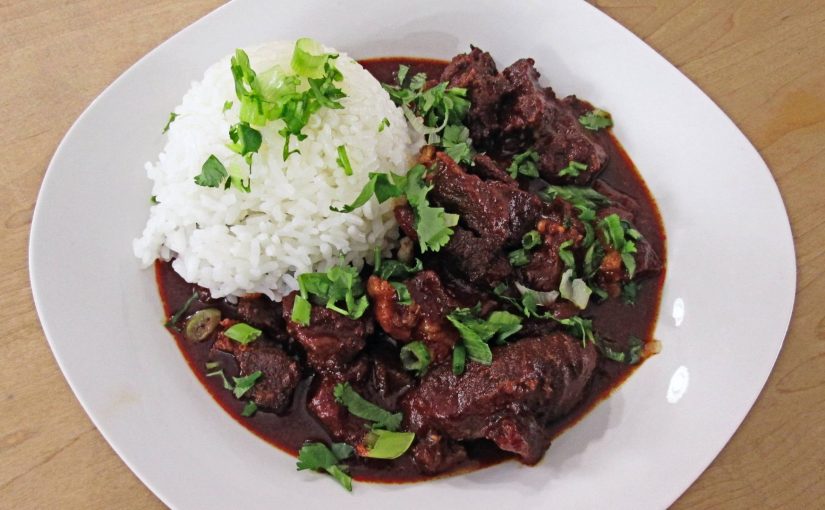 Most Texans believe they have the best chili in the world and they’re not wrong but there are some other Beef Chili recipes out there that have become an American Staple on Mexican Food. This Chili Colorado or Chili Con Carne, as it’s known in Tex Mex, is a great example. It’s origins, however, derive their flavor from the Chili Colorado, which means, ” Red Chili”; hence the name.

The very essence of this recipe comes from the flavor of the Chili Peppers that are cooked down and blended together, with a few other ingredients. Being that this recipe is called, “Chili Colorado” it would be assumed that the Colorado Chili should be used and, technically, that’s true but there are a few others that can be used that are practically the same thing.

California and Guajillo Chilis can be used as well. The only main difference is that they technically belong to different pepper families, though, all portraying that beautiful burgundy hugh that gives this recipe it’s rich color and flavor.

Though, 3/4 of the dried peppers I use in this recipe are red chili’s, it’s quite common to add a few dried Pasilla pods as well. These peppers are much darker and look and smell like a cross between a pepper and a prune. All of which are de-seeded and have the stems removed, before cooking.

The Beef you should use

In this recipe I’m using Beef Cheek Meat, which takes a lot longer to tenderize when it’s cooking. In fact, unlike how I demonstrate in the video tutorial, it took me 6 hours of braising to get this meat to break down the connective tissue and become tender enough to eat. Big but here, though, the flavor Cabasa or “Cheek Meat” gives off is stronger, like lamb or venison. If you have either of those available, for a good price, I recommend using those instead. Otherwise, for this recipe, stick with a couple of lbs of Beef Chuck.

Sear seasoned meat ,10 to 12 minutes, under Broiler or in a pan or on a Grill.
Then Braise in Guajillo Sauce 1 1/2, lid on, another 1/2 hour, lid off to reduce
sauce, if needed. Otherwise, keep the lid on. 2 hours full cook time.

This is great, served with steamed rice or in tacos and burritos. 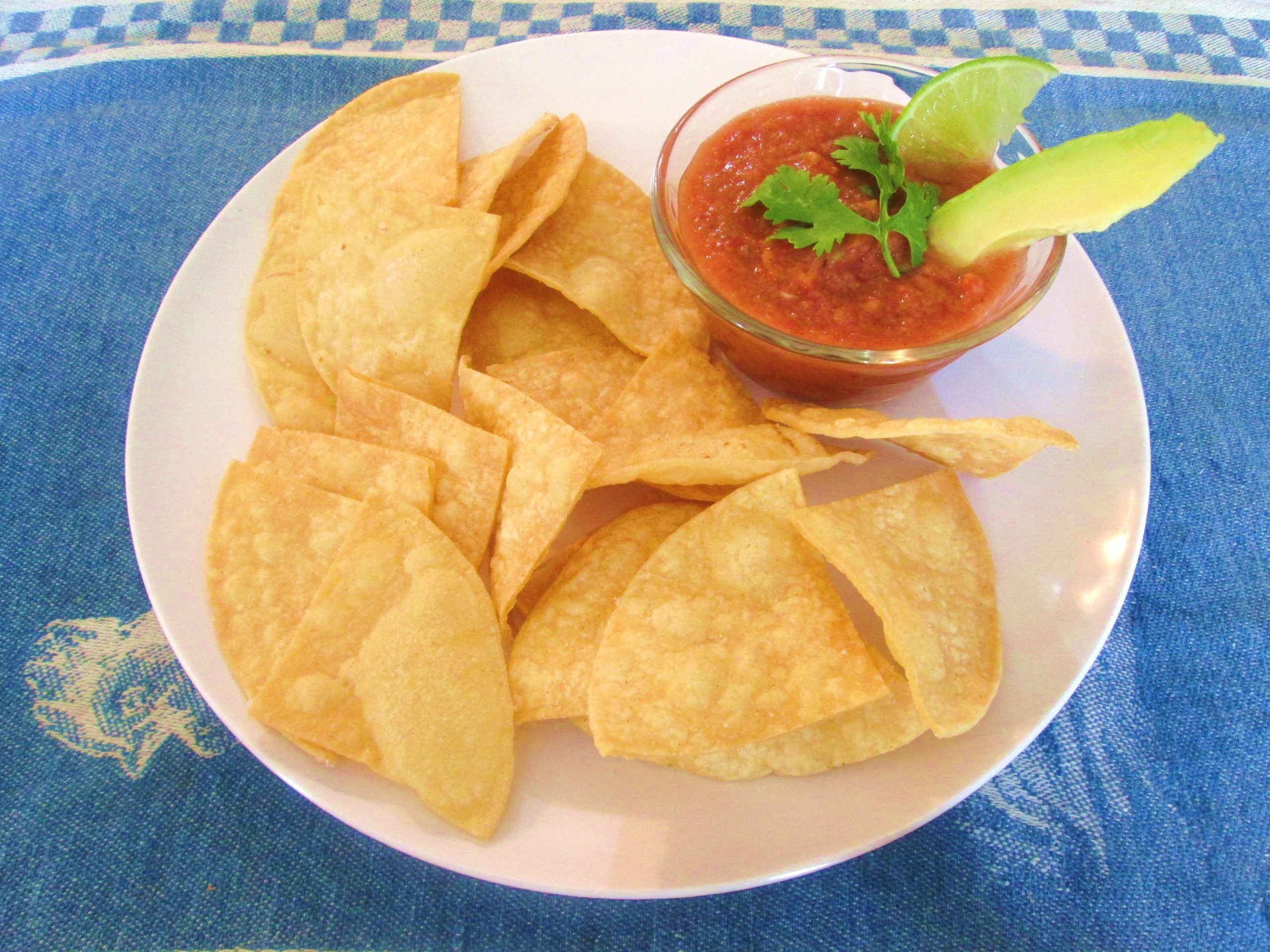 When I go to any Mexican or Tex Mex Restaurant, I expect Corn Tortilla Chips and salsa.  I want my chips hot and salty, like they just came out of the fryer.  Then I eat at least an entire bowl for myself before the help even has a chance to bring me my food.  It’s kind of funny.  Aren’t the Corn Tortilla Chips and Salsa food?  No, that’s the food before you get the food.  The food before the food!  Though it usually fills me up, its still just Chips and Salsa.  But, don’t you crave this at home?

First things first.  If you don’t already have a Deep Fryer, go get one.  They’re only $30 bucks and they really go a long way. Now, when you’re deciding what kind of tortilla you want to use, it’s really simple, because there’s only a few choices.  Sure you could get all exotic and go for the Blue corn, but most likely, all you’re going to find at your local grocer are the basic yellow and white corn tortilla’s.  So, all of you got to do is choose your favorite.  I personally like a lighter corn taste, so I go with the white corn tortilla’s for that reason, and that reason alone.  This video will show you how easy it is.  Fry the tortilla slices at 350 degrees for 2 to 2 1/2 minutes and salt heavily.  Then sit down and enjoy your fresh Corn Tortilla Chips with my Fresh Salsa recipe.

Slice the Fresh Tortilla’s into fours and fry for 2 minutes at 375 degrees F and then salt the Corn Tortilla Chips to taste. 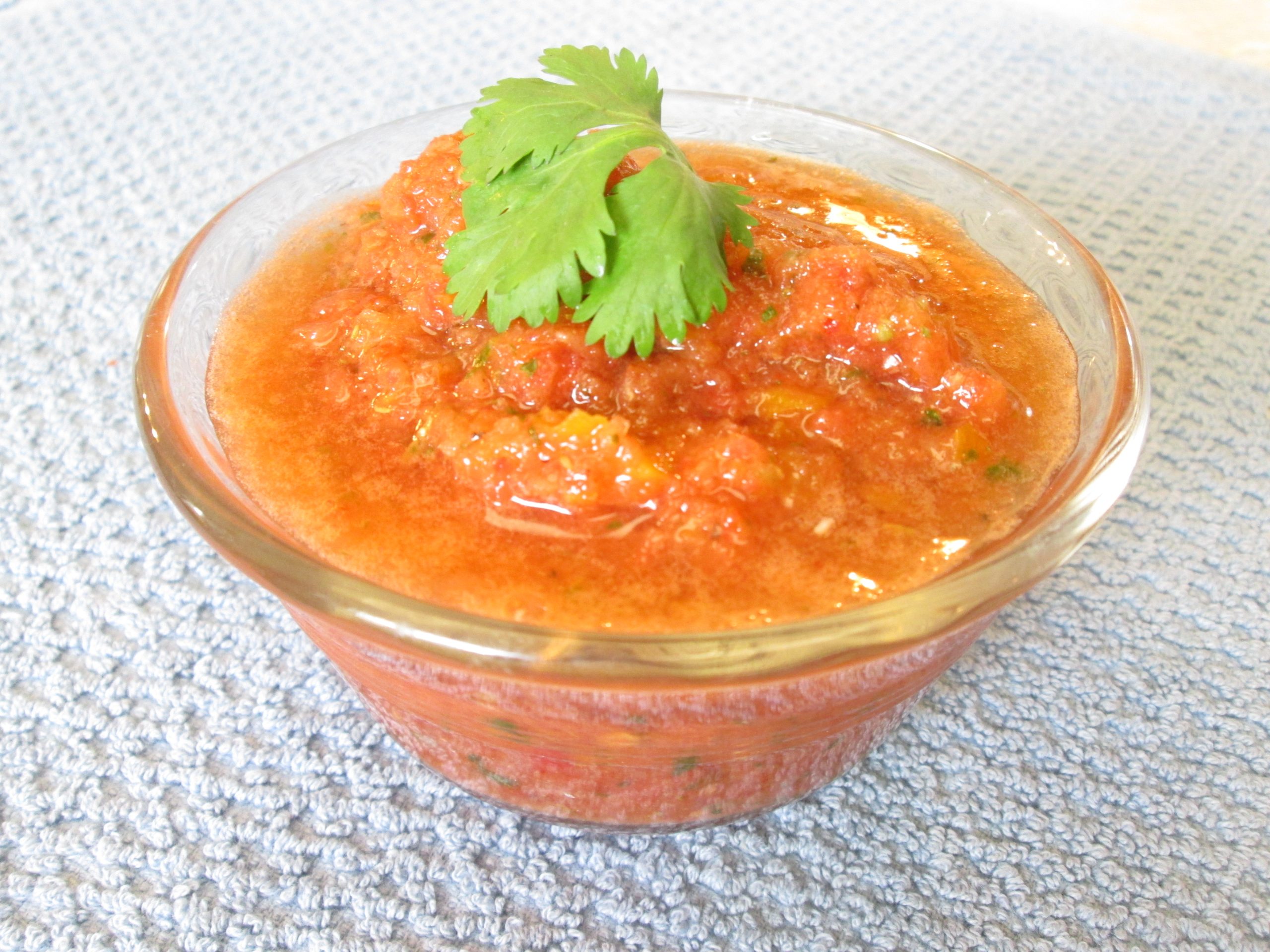 Everyone loves Homemade Salsa.  Without a doubt, it’s kept my marriage together!  My wife loves Homemade Salsa and my ability to crank it out in a matter of minutes.  That’s what I want to share with you today. After you flip through this quick tutorial you’ll be able to throw together Restaurant Quality Salsa in no time.  All I ask is that you share this recipe and where it came from with everyone you share the salsa with.  As much as you would like to bathe in the spotlight by taking credit for this recipe, you can do us both a favor by crediting Poor Man’s Gourmet Kitchen for the ingredients and patting yourself on the back for being the genius that found this Homemade Salsa video recipe!  See, win win all around! Now let’s break it down.  Do you like your Salsa mild or hot?  Notice I didn’t say “Spicy”.  It doesn’t matter which you prefer because either way, you are going to get the same amount of spices in this recipe.  But if you want to control the heat, then you’ve got to control the Peppers!  O.K., write that down (or hit the print icon above).  Onions and Peppers bring the Heat, so there has got to be a good balance.  Garlic spices it up a little bit, but it mostly adds that awesome flavor everyone is looking for in their Homemade Salsa.  I know that the Jalapeno’s I’m adding are HOT!  Because of this, I only add 1/2 of a de-seeded Jalapeno and 2 smokey Chipotle Peppers (which are optional).  Other than the seasonings, everything else in this recipe is relative to any other Homemade Salsa recipe you’ve ever had.


Add all ingredients to a Blender and serve.  Flavor because more potent and flavorful the longer it marinates.  So this salsa will get better in your refrigerator overnight if you can make it the day before you’d like to serve it.  Homemade Salsa, right here in the Poor Man’s Gourmet Kitchen!