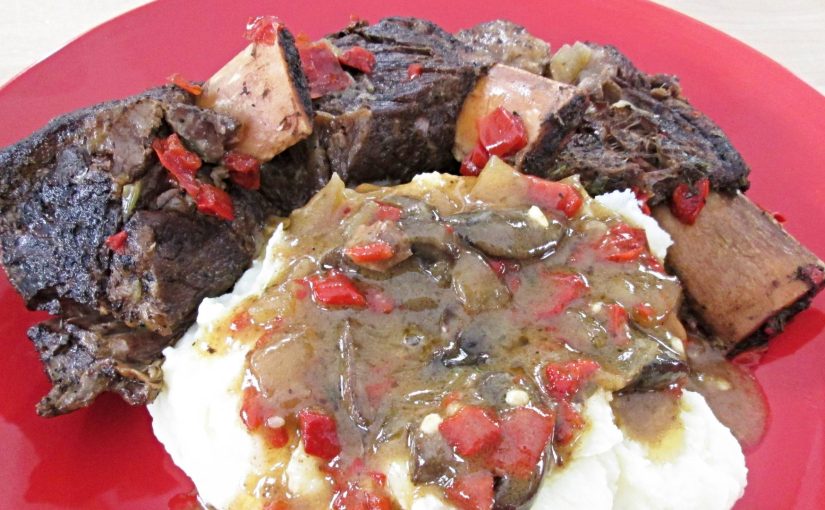 If you’ve ever wondered why the large beef ribs don’t have much meat on their bones, it’s because they’re the rib bones that are cut away from Prime Rib/Ribeye steaks. So, if any more meat was left on the bones, it would take away from those steaks. To get a meaty Beef Rib, you need to pick up some short ribs. They usually weigh about 4 lbs but they slow roast and/or smoke beautifully.

That being said, this is one of the best and easiest ways to prepare Beef Short Ribs, without a lot of hassle. There’s hardly any prep work, a little bit of after cooking to make the gravy but the hardest thing about this recipe is the waiting. It takes 10 hours to cook these ribs, in a slow cooker, to get them juicy and tender. But, it’s worth it!

Sometimes these cuts aren’t easy to find and if you find them they can be a bit pricey. They’re often cut into singles with an average of 8 Riblet portions but, sometimes, the ribs can be bought as a whole. If you’re lucky, you have a butcher that will cut them by your request or, at least, offer both.

If you can’t find short ribs or you need a cheaper alternative, I suggest you purchase a thick Beef Chuck that can be cut into rib size portions, with all of the connection tissue, that could imitate good short ribs. We’ll call it, Poor Man’s Beef Short Ribs!

Beef Short Ribs are very meaty and popular among barbecue enthusiasts because of it. They are terrific when they’re smoked on a grill and just good but different, if they’re slow roasted in the oven or in a Slow Cooker. Today, I’m going to show you a simple method I like to use in my old school Crock Pot.

Rib meat can be very tough when it’s cooked at higher temperatures for shorter amounts of time. That’s why the prefered method is to smoke or roast for a slow amount of time and at lower temps. Both smoking and roasting embrace this methodology and I’m a big fan of the process, myself.

My Crock Pot (slow cooker), however, is old. Like 80’s old but that’s the era that made the best slow cookers. They have a heavy glass lid that traps the steam in so you don’t have to add any liquid to keep the meat from drying out. If you’ve got one of the newer slow cookers, that requires the addition of liquid as you roast, then you need to follow those cooking instructions along with this recipe, to get the same results.

I season and sear all of the Beef Short Ribs, in a pan with Olive Oil, before I add them to the Crock Pot. Then I add chopped onion, bell pepper, mushrooms and parsley. Again, no liquid unless your slow cooker requires it. After 10 hours of cooking on low, I separate the Ribs from the liquid (above pic).

I use the liquid, from the crock pot to make the gravy. I make a small garlic and butter based roux before I add the liquid, including all of the chopped and roasted veggies. If a deeper and more complex flavor is desired, a splash of red wine or a small amount of tomato paste can be added. I’ve had it both ways, they’re both great but I prefer it without either.

Season the Beef Short Ribs with Kosher Salt and Pepper, then sear all sides in a hot pan. Add sliced Onion, Bell Pepper, chopped mushrooms and parsley to the slow cooker, topped with the seared short ribs. Cook on low for 10 hours.

Extract the Beef Ribs from the pot and start cooking the Gravy in a large pan on the stove. Start with the butter, then add the garlic and flour. Stir for 1 minute until it’s pasty and starts to brown. Then add the slow cooker juice including all of it’s contents; onions, peppers, mushrooms and parsley. Cook and stir over High heat, until the gravy thickens, then turn the burner down to low. Serve Beef Short Ribs
and Gravy over mashed potatoes. 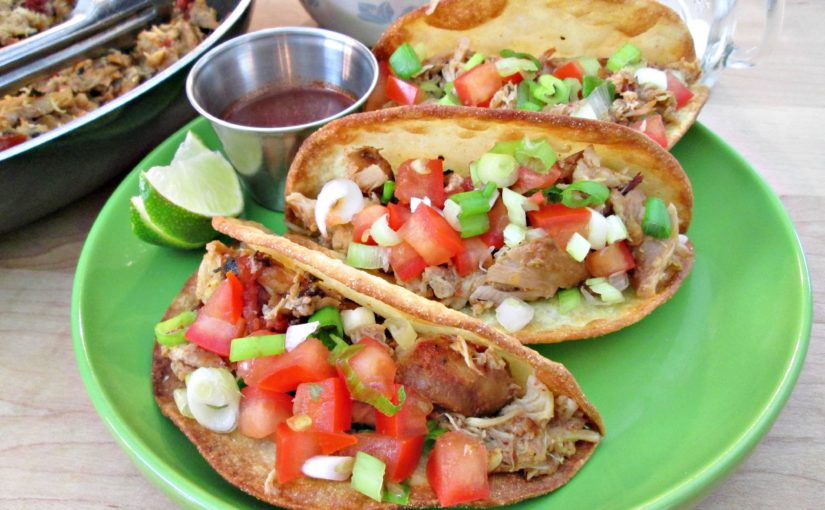 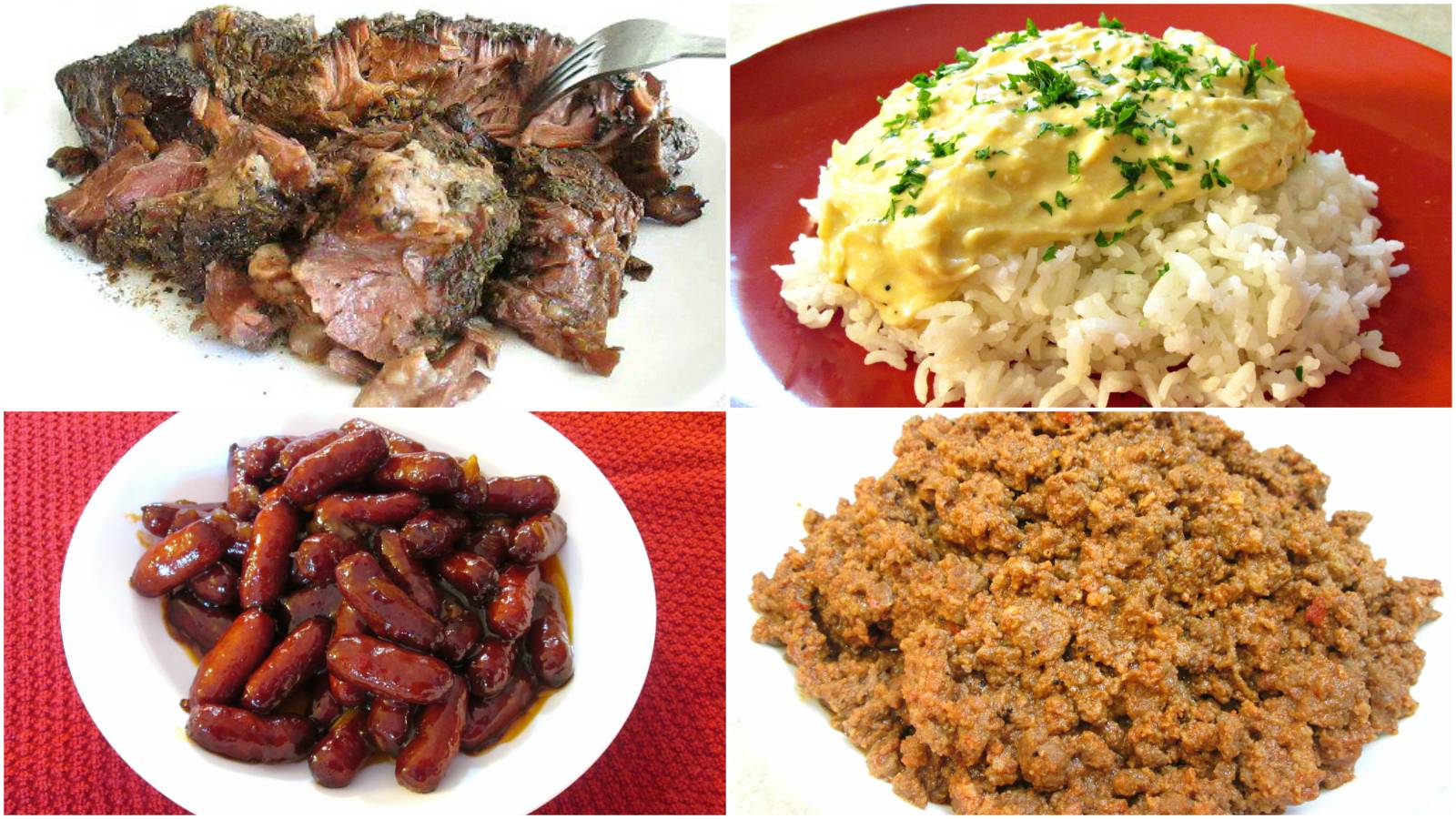 The slow cooker is a busy parents best friend. I know if I wasn’t married, to the most amazing cook out there, that I would be using mine all the time. While Mr. PMGK was working on this top 5 list, I told him that this Chicken and Gravy recipe was my favorite of the 5. I told him I wished that he would make it more often. His response was, you know the recipe(as I shook my head and gave him the look). Everyone knows by now, I do not cook and why would I? I have him!

I can recognize the smell of Roast Beef in the crock pot anywhere. To this day the smell makes my mouth water. Very often growing up I’d wake up to the yummy smell Sunday mornings. If I was lucky I could pull a taste from the pot without someone noticing but with caution. If my mom caught me, it’d be a slap on the hand for sure. When you grow up in a home with 13 children, one crock pot full of meat is hardly enough to go around.

These lit’l smokies are so amazing! They have so much flavor. What I like best about them is that you can throw them in the crock pot and forget about them. Before you now it they’re done. They are my favorite to prepare when I have people over or when we’re making a meal that is going to take a while. No one is ever waiting around hungry for dinner if we make these to snack on while they wait.

Don’t get me wrong this recipe is great but when I hear the word chili followed by the word no beans, my first thought is, “no beans?” When I think chili, I think beans! I’m Hispanic and we most definitely love our beans. However, Chili no beans are so good for so many things. They are my absolute favorite on chili cheese dogs. If you make a crock pot full of these for a party it will be gone before you now it. My husbands first intention, when he created this recipe, was to use this as a filling for fast food style tacos and burritos.

Kalua is Hawaiian for barbecue and it’s traditionally cooked slow and low buried in the ground. Today’s technology, however, has changed drastically and allows us to use appliances like an oven or a Slow Cooker. PMGK makes Kalua Pork both ways. Either way it turns out perfect and so tender! There are benefits to cooking this dish either way. If we don’t want leftovers, we make it in the crock pot and just use a small butt roast instead of a full shoulder. If we want left overs, there are a lot of pulled pork style recipes that whole pork shoulder is good for. For example: My absolute favorite Kalua Pork recipe is our classic Kalua Pork Fries. If you haven’t tried them yet you are truly missing out but it doesn’t end there. My husband has posted Kalua Pork Burritos, Tamales and another recipe to cook the whole shoulder roast in the oven.

Are you excited to use your Slow Cooker yet?

If I haven’t gotten you excited about trying these recipes or at least using your crock pot a little more then I don’t know what will! What are you waiting for? Watch the new video above and let’s get started making dinner a whole lot easier and so much more delicious!