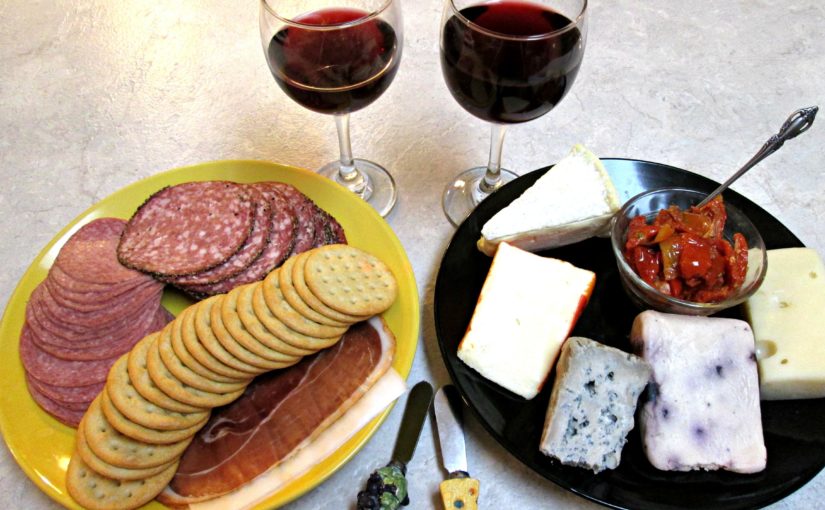 As you may or may not know, my family and I celebrated my wife’s Birthday this last weekend.  I received such a good response from some of you on Facebook, wishing my wife a Happy Birthday, that I decided to share one of the things I did for her.  And since it pertains to food I thought you might enjoy this.

As you can see in the photo above, I’ve got 2 plates covered with Cured Meats, Crackers and Cheese.  Which in most places around the world, it can really eat a hole in your wallet.  I mean, it’s no secret that cured meats and cheese can be very pricey.  Especially if you start getting exotic.  Where I live, for example, I can buy 4 oz. of Prosciutto for about $10 bucks.  But, that’s virtually $40 dollars a pound!  Are you kidding me?

So am I telling you that’s what I spent for each one of these cured meats?  No, I’m not and I didn’t even come close to that kind of expense.  The Great thing about food is nobody wants it to go to waste.  So if you hit the markets when they’re in rotation, you’re going to save your self a ton of money. Another example, in the above photo I have two different Salami’s; Genoa and Boars Head Black Pepper Salami.  Both are a half pound each and were marked down 50%.  The Prosciutto was only 2 dollars for 3 oz.  But at full price, on any other day, I would’ve spent $20 bucks just for what you see on the plate and when it was all said and done, I walked out the door paying only 1/3 that price. Now when it comes to these Cheese’s the price continues to soar. That is, unless you can pick these up on rotation too, and you can.  The funny thing about cheese, however, is you can’t really tell when it goes bad because it stinks when you buy it.  So you’re completely at the mercy of the attendants, swapping out the prices to keep up with the expiration dates.

Between these five cheese’s alone one could spend $40 to $50 dollars all together.  Some of these slices normally range between $8 and $13 bucks a piece.  There’s a Fromager D’affinois Cheese that is very mild and Creamy(top left), a Port Salute(Orange Label) that is mild and creamy as well just a slighly different taste.  The Blue Cheese is obvious, you either like it or you don’t.  The English White Stilton with Blueberry interesting because it’s very sweet and similar to the taste of cheese cake.  And last but not least, the Jarlsberg lite, which is just a fancy way of saying “Deli Swiss”.  And if you’re wondering what’s in the middle, those are my Marinated and Roasted Cherry Tomatoes!

So the night before my wife’s Birthday, we started celebrating each others company with the peace and quiet of the house(after we put the kids to bed), the widescreen with Netflix, a cheap box of wine and some very expensive Meats and Cheese’s that I bought for practically nothing.  And just so you know, I’m not a cheap bastard, I just know how to live and moments like these are priceless! 😉