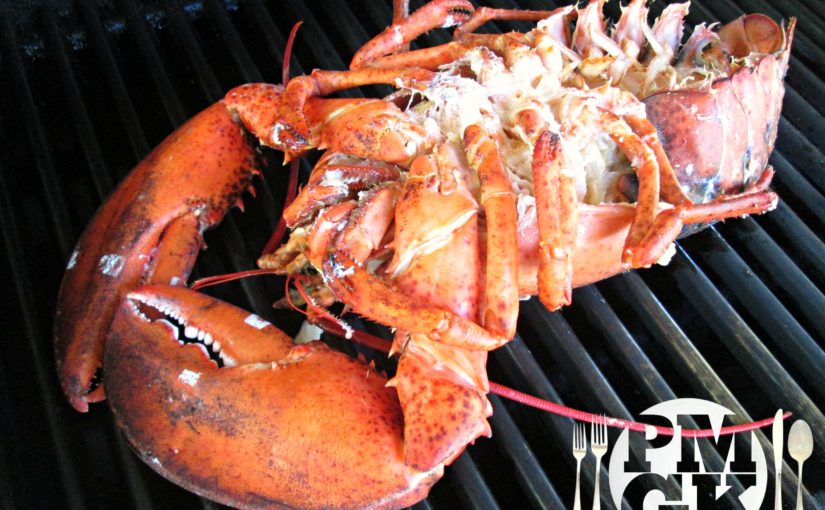 This is, absolutely, hands down, the Best Grilled Lobster that I have ever had and it is so easy to prepare and grill.  The hardest part is dispatching a live lobster, if that sort of thing bothers you, but I show you the most humane way to do it and the quickest way to to clean and sanitize your lobsters, before grilling.  But, this tutorial isn’t just a how to, I give you the best secret sauce recipe to saturate the meat and it makes the lobster more savory and succulent than you could’ve ever imagined. I’ve been waiting a long time to show you how I cook a Grilled Lobster.  The reason being that, up until now, there wasn’t anywhere near by selling live lobsters.  A while back I filmed and posted about my local Oriental Market.  Well, right next door, another Asian market, about the size of Walgreen’s, opened with a large variety of seafood options, including live crab and lobster tanks.  I was so excited.  The only problem was, they only had dungeness crabs.  I talked to the owner and checked back weekly for several months but they were really having a hard time finding a vendor with reasonable prices that would deliver to this area.  Long story short, they found one.  I’m still not ecstatic about the price but at least, now, they are available.  And thanks to my Patrons, I was able to walk in there last week and say, “Give me the biggest one!” How much does a 3 lbs Grilled Lobster Cost?

This Grilled Lobster ain’t no joke and at these prices, who’s laughing?  I mean, if this is the market price, can you imagine what a 3 pound lobster would cost in a Restaurant.  The basic philosophy and justification behind restaurant cost is basic biz 101;supply and demand, overhead and employment cost and of course profit.  The easiest way to calculate this equation is to take the cost of the product and times that price by 3.  I paid $46.03, American, for this lobster.  So, in a nutshell, a restaurant would charge you close to $160!

YouTube Trolls often comment, “Poor Man’s my Ass” on my videos because they don’t grasp or understand this concept.  Also the fact that there is a time and a place for everything.  I don’t buy expensive food and cook and eat like this all the time.  That’s just ridiculous.  But, occasionally, for holidays or a special dinner, with my wife and family, I make an exception.  And the more of you that choose to get involved with my work, can help me make this happen, for you, more often.

Also, ironically, if you google, “lobster food history”, you’ll find that lobster was considered “Poor Man’s” food and served only to people and families in poverty. It’s always best to cook fresh and the only way to cook a fresh Grilled Lobster is to dispatch a live one.  This isn’t for the faint of heart but I strongly believe it’s for the greater good.

The last 100 hundred years or so we’ve gotten away from such practices and we no longer appreciate what we are eating.  We live in a world of instant gratification and all of the work that goes into the hamburgers we all love to eat so much is taken for granted.  We need to get more hands on and stop filling our heads with delusions that it’s wrong to do it or that it’s okay as long as someone else is doing it.

That being said, I show you the most humane way to dispatch a live lobster in the video.  The only thing I didn’t mention, however, is the fact that I placed the lobster in a more dormant state before doing so.  A lobsters normal habitat and water temp can vary between 45 to 60 degrees Fahrenheit, depending on where it’s from.  So, you can place the lobster in colder temperatures, like a sink full of ice water or a freezer, for 20 to 30 minutes, and the lobster will become more calm and docile.  This hibernation like state is considered, by many, to be the more humane way to take a lobsters life with a quick plunge of a sharp knife to the back of the head.  It’s quick and virtually painless.

Now all you have to do is clean the cavity and harvest the goods. Before you cook your Grilled Lobster, you have to clean it.  Technically you can just throw them on the grill without doing so but there are a few things you should know about.  First is the Tomalley, which controls the digestive glands in the lobster.  Second is the Roe and it’s more or less lobster caviar.  Both are considered a delicacy but in truth, I don’t care for either.  The picture above is the Roe and it can be served raw or cooked.  Generally you just mix in some salt.  The Tomalley can be used as a spread, like butter but it’s best to just leave it alone and wash it down your sink, like I do in the video.  There are health risks associated to eating Tomalley, so proceed with caution.  Also, the same way you devien shrimp, you can devien lobster. You’re Grilled Lobster can, technically, be baked if you prefer or if you just don’t want to grill.  In all honesty the grill just adds that smokey flavor which can be achieved with liquid smoke if you’re cooking in the oven, but still want the grilling taste.  The secret sauce recipe I give you below is more of a paste or a “topping”, if you will, that should be applied towards the end of the cooking.  Make sure the meat is well moisturized with some olive oil, beforehand, so the lobster doesn’t dry out and bake at 350 degrees Fahrenheit for 1 1/2 minutes per ounce before applying the butter paste topping.  If any of the topping mix is left, when it’s done, just add a few tbsp more of melted butter for dipping.

You can eat the Claws, Arms, Tail and you can use a rolling pin to squeeze meat out of the legs.  There’s more meat at the base of the legs and in the body than most people realize, so be sure to check every nook and cranny.

After the lobsters have been cleaned, steam them in a couple inches of water for 5 to 10 minutes, depending on their size.
Then Grill as instructed in the video for an additional 5 to 10 minutes before applying the Garlic, Basil, Onion and Butter paste.
Use half the butter for the paste and the other half for dipping the Grilled Lobster meat. 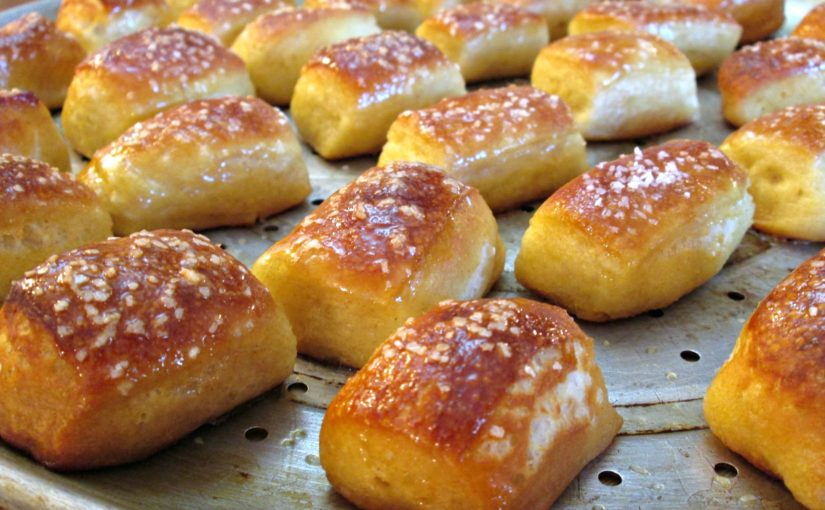 Pretzel Bites are a fun and easy way to make any party rock.  Especially for those game day events or football Sunday.  Even if you just have the munchies, this can be a real tasty way to enjoy a snack.  This recipe is very easy to make and you can use practically in bread or sour dough recipe to make pretzels but I’m going to show you how to do it with Pizza Dough.  Also be sure to check out my Garlic Parmesan Bread Knots and my Steakhouse style Scones!