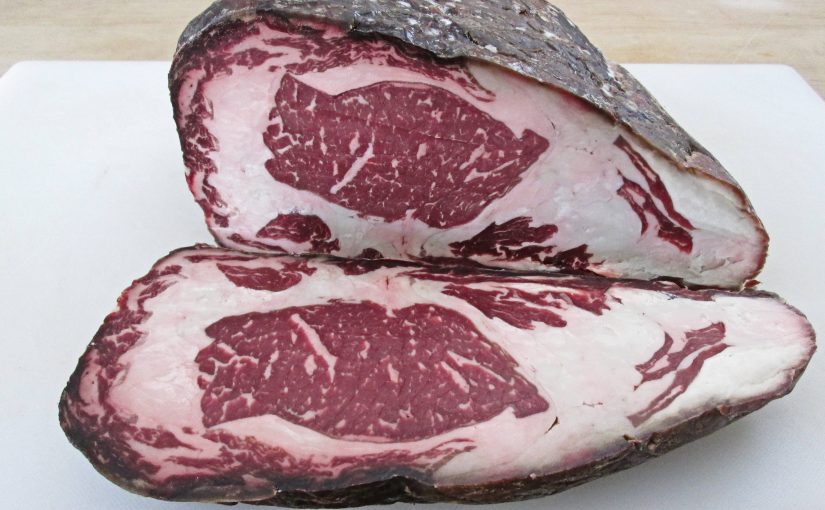 I’ve learned several different things about cooking great steaks, over the years, and the one constant, that everyone can agree on, is it’s got to have flavor. How it’s achieved, however, varies with preference and style. The 3 most common cooking methods are grilled, pan fried, oven baked/broiled or a combination of the three. So, other than variations of added ingredients, flavor can come from the fire and whatever you choose to fuel the flames on a grill or whatever you decide to throw in a pan. But, what if you could achieve flavor just as good with out any other ingredients than basic Kosher Salt and Ground Black Pepper. Dry aging your beef is a really great way to do it.

What is Dry Aged Beef

One of the greatest kept secrets in gourmet cooking is how to properly age beef. It’s something that our ancestors had knowledge of but, because of refrigeration, the practice was no longer necessary to pass on to the following generations. It’s now considered a luxury and can be quite expensive to purchase. Steaks that would normally cost the average grocer $5 to $6 dollars per lb can cost upwards of $20+ per lb after dry aging.

This process used to be done out doors where one couldn’t predict the weather, temperatures or exact humidity that is involved to perfect aging and prevent spoilage. Meat had to be protected from carnivores and other predator’s like insects but, now that we understand the science behind this incredible process, we can actually use refrigeration to our advantage and predict outcome almost every single time.

To do this at home, Dry Aged Wraps or Bags are used to protect the meat from other ingredients in your fridge and vise versa. Healthy Bacteria’s and Molds containing Penicillin form on the outside of the meat just like aging cheese but you don’t want to add any off put flavors or spread mold anywhere else in your refrigerator. That’s why I’m recommending these Dry Aged Bags. I am an Amazon affiliate but I’m not affiliated with this company, at all. I just found that you get more for your buck with this particular brand because the others are almost twice as much for less bags.

Now, Dry Aged Beef is simply a controlled atmosphere of humidity and temperature that ages the meat like a fine wine or cheese. The best meat for dry aging are sub-primal cuts on the bone like a strip loin, ribeye or sirloin. Water evaporates from the muscle and safe bacteria’s, with a variety of penicillin’s that form a harden surface around the beef as it ages for a period, on average, 21 to 28 days. Beef cuts with large fat portions can protect the meat from drying out to much as the enzymes in the dry aged beef break down the tissue, leaving the meat quite tender.

Once the Beef has been aged properly, steaks can be cut into portions. Most people will trim off the outside layer, all around the steak, before cooking. Only about an 8th of an inch is necessary but, if cooked properly, it’s safe to consume. The fattier parts can be cooked and rendered down in water, to prevent burning, and the fat can be used to cook the steak in, if you’re pan frying.

I highly recommend minimizing the added ingredients to your steaks when cooking. If you’ve never had aged beef steaks you should try it with Kosher Salt and Pepper only, at least for the first time. If you’ve been following my blog and channel, you know I love garlic, butter, herbs and grilling as much as the next guy but, dry aging adds flavor that doesn’t require any of those things. If you add them or even barbecue these steaks first you’re going to cover up the natural flavors that dry aging adds to your steak and you’ll never fully understand or appreciate the process if you do because that taste will be berried and lost to the fire and/or other ingredients.

I would recommend cooking your dry aged beef steaks in a straight pan fry with the aged fat on the stove and maybe the oven(like I show you in the video) or a full cook under the broiler in the oven. Cooking time will vary upon steak thickness.

A word of caution

Most professionals won’t advise folks to try dry aging beef at home because of the technicalities. For example: a high humidity of 80% and an average temperature of 33° to 38° Fahrenheit are recommended at all times. This means, NO PEAKING. If you’re just trying to do this in the family refrigerator, it’s best to do it in one that is either a) not opened 20 times a day and/or b) separated from the bulk of the ingredients.

I use a drawer and a crisper is best because it allows you to control the humidity for fruits and vegetables. Obviously I’m aging meat instead but vegetables favor a higher humidity so I adjust the fruits and vegetable setting to vegetables. Most refrigerators are already set to the correct temperature. All you have to do now is follow the instructions in my video tutorial and be patient.

If all goes well, you’ll have a perfectly aged portion of beef. However, if there’s a real funny smell to your beef and it smells spoiled it most likely is. Properly aged beef will smell almost like nothing, for the most part, but will have a small hint of nuttiness’ to it, which is normal and how it should be.