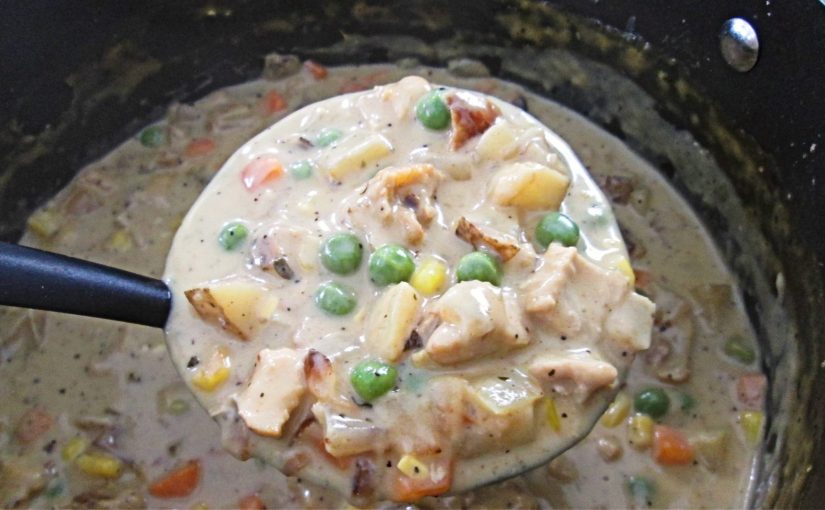 The Best Corn Chowder has Chicken

I can’t say enough about this recipe. Plus, I love practically anything “Chowder” so, it’s safe to say, being the author and all, that I might be a little bias. A Chowder is defined as a soup made with milk and/or cream, also a roux for thickening and the addition of seafood or vegetables or both. There are two other common ingredients, however, found in most Chowders; chopped onion and potatoes.

There are many different recipes out there, in this great abyss we call the web. Clam Chowder has always been one of my favorites and I like to make mine with bacon. There is of course other Seafood recipes, similar to this one, that add chunks of fish or shrimp and, of course, simple potato or corn chowder recipes.

For this particular chowder, I decided to step it up and make it chunky; like a stew. That’s why I’m calling it, “Beyond” Chicken Corn Chowder. I combined Chicken Chowder with Corn Chowder and I threw in a few more vegetables. In fact, the beautiful thing about this recipe, is it is interchangeable. It can be made with just the vegetables or the addition of Seafood, instead of Chicken.

If you want to make a vegetable chowder, just leave the chicken out and use a vegetable broth instead. If you want a Clam chowder, exchange the chicken broth for Clam juice and add chopped Clams instead. The same goes for seafood… shrimp or fish. Just swap the broth and the meat and your chowder flavor will follow.

Season Boneless Chicken Thighs with Kosher Salt and Pepper
and Blackened Seasoning. Could also use a dash of Cayenne
for spicier taste buds.

This Chowder is EXCELLENT for any recipe;
Clams, Chicken, fish and seafood or plain Corn Chowder.

Start the cooking in a large pot by adding the butter first, then the garlic, onion, carrot, corn and peas, then flour, wine and broth. Bring it to a boil, then add the potato(Tater Tots) and whipping cream. Stir until thickened and reduce heat to a
simmer. Add the Cod and season with dried Parsley, Kosher Salt and Pepper, Blackened Seasoning and white pepper.

Be sure to watch the short video tutorial and I’ll demonstrate exactly how to make this Chicken Corn Chowder.