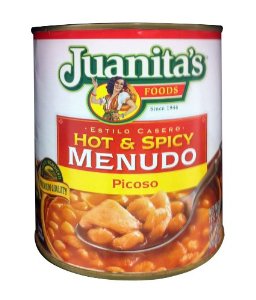 How I found this Menudo

Menudo I’m told, is traditionally prepared on Sunday morning’s for breakfast.  I haven’t researched it, I’m just going by the word of a friend of mine that’s inspired some of my authentic Mexican recipes.  It might not be a Sunday morning delicacy for most but apparently it is at his house.  Regardless,  this is a dish I’ve grown to love.

It was first introduced to me by a coworker in a Denver Refinery I was working in. The company that had the maintenance contract at the time employed several Mexican men that ate excellent authentic Mexican food from day to day, thanks to the preparation of their Mexican wives(go figure).  Anyway, one specific gentleman made a little extra money on the side selling burritos at work that his wife prepared every morning before he’d leave.  Those of us that usually skipped breakfast in the morning, knew that we could rely on him vending out burritos from the big blue cooler he toted in day after day.  Burrito’s filled with eggs, chorizo and chili’s, or potatoes and pork with beans.  Thursday’s were my favorite day to buy because those days she made Chili Relleno’s with beans, rice and goat cheese wrapped in a tortilla!  Mmm Mmmm, those were the goods.  So, getting back to the point, this same guy’s wife dropped off a huge grocery paper bag full of Bolillo’s (bread) and a pot full of Menudo.

He invited me to try it, but I really had no idea what I was getting into and with a name like Menudo, I had to ask what it was.  Well, a chili base soup with Tripe and Hominy didn’t sound too bad but honestly, I don’t think at the time I realized what Tripe was.  He told me to get a bowl and make sure I grabbed some bread.  So I did, and at first glance I was really skeptical.  Then at first chew I thought, rubbery not dreamy.  Then the after taste kicked in and I wanted more, end of story.  I’ve been getting it at restaurants ever since.  I believe Menudo is one of those recipes.  It’s a hit and miss and you either like it or you don’t.

I guess the moral of the story is, don’t be so quick to judge and give everything a chance at least once.  Also make your decisions based on the experience of the cook.  I have found that most of my “bad experiences” came from cooks that didn’t know how to prepare a dish even half as well as they thought they did.  And when I was willing to give the recipe a second chance with someone else cooking that absolutely without a doubt knew their recipe, I usually found the light. Now as far as this dish goes, the easiest and fastest way I know how to whip out Menudo the very moment I’m craving it, without any preparation or the 6 plus hours of cooking time is to have it already to go on the shelf.  Now you can purchase this fine recipe in a can these days and it’s pretty comparable to a fresh batch made from scratch.  To be clear this is NOT a recipe video, just a Quick and Easy way to knock out a 6 hour soup, Menudo, in 10 minutes.