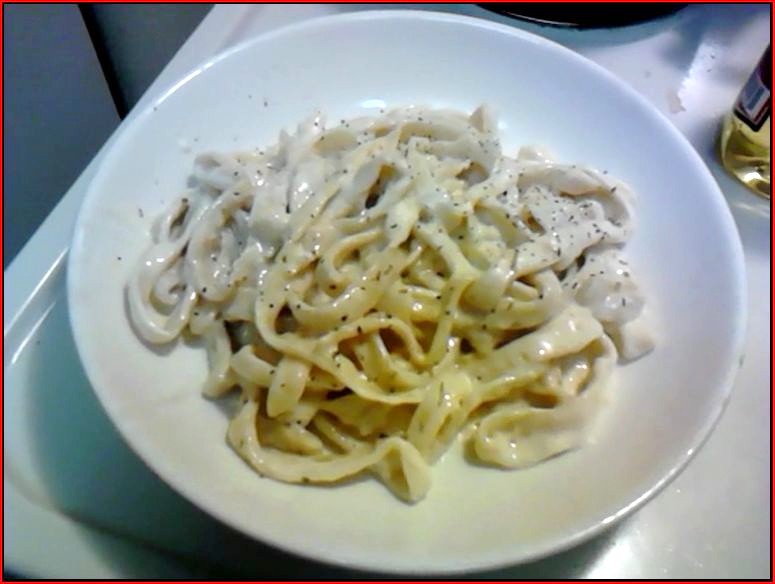 This Fettuccine Alfredo Recipe  is one of my favorite’s and making it from scratch is so easy you won’t believe it.  To tell you the truth, my original intention was to make this a recipe Solly for the Alfredo because the flavor is so unreal, you’ll never buy Alfredo in a bottle again.  In fact so many friends and family members have begged me for this recipe, so I have decided to just include it with my pasta dishes.

To fully understand Alfredo and how it can go wrong you’ve got to understand the ingredients that can screw it up.  First off, with this Fettuccine Alfredo Recipe use Cream NOT Half and Half.  Unless your on some major mission in your owning dieting this is a big no-no because it just won’t taste right.  The second thing, is flour; use it very sparingly and don’t burn it when you stir with the butter and garlic.  If you do, that flavor will spread through out the entire sauce and it will ruin it.  In fact, the flour isn’t even a requirement to make the sauce it really just helps the reduction so it will thicken up faster.  If you are patient, make the sauce with out, and then you won’t have to salt it either.  That about cover’s the things that can go wrong, now let’s talk about what can go right!  The beautiful thing about this recipe is you can own it and make it your own by adding any of your favorite pultry’s or shellfish directly to the sauce or topping it off after you stir in the pasta.  Whether you’re making a Shrimp Alfredo recipe, or a chicken Alfredo recipe, it’s your choice.  Just follow these easy steps and you are on your way to making the best Fettuccine Alfredo Recipe, Hands Down!

This is entirely just my opinion based only on my experience and personal tastes about the sauce its self;  I mentioned earlier that the flour doesn’t have to be used when preparing this sauce; well that’ s true.  In fact I believe the more you use it the more you kill the flavor and defeat the purpose the combination of the butter, garlic and cream are trying to create.  Thus having to reconstitute with salts and other means to try and put flavor back into an already perfect sauce after it’s already been murdered!  As you can see I’m a little passionate about this theory, but when you are cooking for just a few there is no reason to sacrifice this recipe by watering it down with flour.  Now on the other hand it is an invaluable additive if you are going to be cooking for many because it will seem almost impossible to reduce and it will take forever without.  Okay?  Enough said.  Reconstituting this sauce is easy and just takes a reheat on the stove or microwave; just make sure you add a vigorous stir because the sauce does separate and appears to be very fatty if you don’t.  That being said, just make sure you take all of this into account when you decide what you are really trying to accomplish with this Fettuccine Alfredo Recipe.