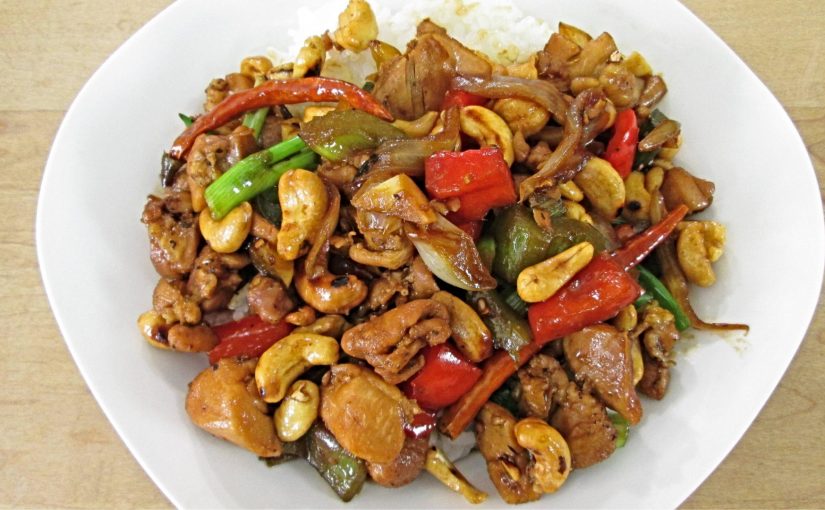 This dish is one of the most popular entrees in American Chinese cuisine. It’s on the menu at practically every Chinese restaurant in the USA and that includes dine in, fast food and/or all you can eat buffet’s. There are many different vegetables that can be included in different recipe versions of this dish including various squash, like yellow or zucchini, mushrooms, onions, celery, snap peas etc., but the one constant that can be expected in every recipe is, chicken and Cashews.

My all time favorite Cashew Chicken recipe has got to be this one and it is the Thai version. I like this one the best because it’s spicier, lighter on the sauce but huge on the flavor. Plus it calls for mostly peppers as the vegetables so it’s a lot of fun throwing in different kinds with different colors that make this recipe pop, both visually and kinesthetically.

The Thai sauce is a bit different than the typical Chinese recipes because they heighten their flavor with soy by using dark soy sauce, which is a richer, deeper soy in both flavor and color. They also use fish sauce. If you’re not familiar with fish sauce it’s not to be mistaken as fishy, at all, but is instead salty. If you’ve ever had Summer Rolls, you might have been dipping them in fish sauce as a condiment. These two ingredients, combined with a few others, push the flavor in this dish to it’s maximum potential.

1/4 cup of Oil for frying, Peanut or Canola

Kosher Salt and Pepper Entire dish to taste. I even shake in some MSG because
that’s what Chinese Restaurants do to achieve Umami flavor.