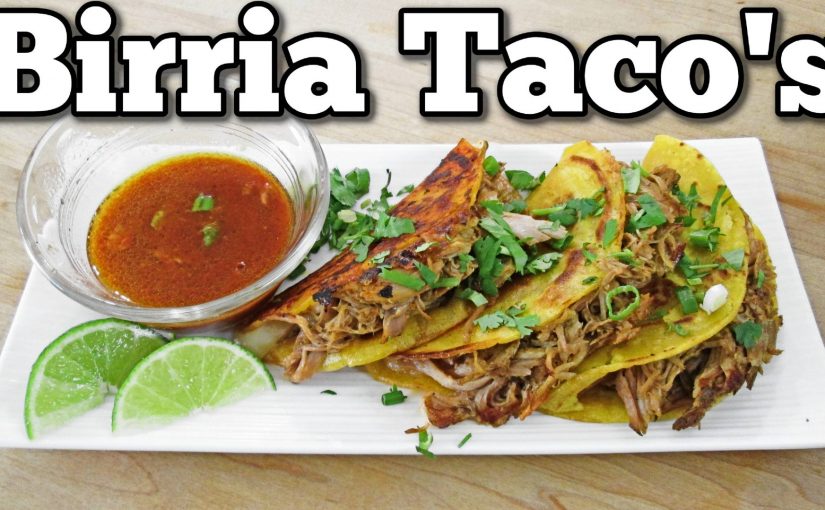 If you don’t know what Birria is, it’s simply slow roasted stewed meat in a marinade sauce that cooks and renders down with the meat and literally becomes a stew. Though Birria was originally made with Lamb or Mutton, it has recently become a Mexican staple using Beef or Pork to make taco’s. These tacos are served with the leftover meat juice, or Au Jus, that can be used to dip the tacos, much like a French Dip Sandwich(French Dip Tacos). I use my Beef and Pork barbacoa recipes to achieve the flavor, tenderness and juice needed to produce good Birria Tacos and I believe you can even use my Shredded Chicken Tacos recipe as well.

It’s important to use the right tortillas when you’re making anything Mexican. Some recipes taste better with corn tortillas and others with flour but there’s also the quality to consider. I know that we all have different tastes and preferences. In fact, I usually prefer white corn tortillas over the yellow but, in this case, it’s better to go with the yellow.

The corn tortillas should also be partially cooked in a small amount of lard or olive oil on both sides. If you don’t do this, the tortilla’s will stick to the pan when you’re making Red Birria Taco’s.

I have no idea how many tacos you want to make but I can tell you that a 8 lbs roast will give you approximately 35 to 40 tacos. You’re also going to need enough tortillas based around that number, so consider that when you’re purchasing the meat. You’ll also need to decide if you want to make Beef, Pork or Chicken Birria Taco’s. The 4 recipes I can offer you are listed below.

Every one of these recipes is as good as it comes. Yes, I am a Gringo but my family originates from Casa Grande Arizona and it’s where we berried my grandparents. I was raised on Mexican food, my friends are Mexican, I’ve worked with Mexicans my whole life and I know how to make great Mexican food. The only people that have ever complained about my Mexican recipes are Caucasian trolls that have maybe watched one video recipe of mine and didn’t even have the balls to try it.

My Mexican Subscribers very often comment with approval. The only time I ever receive criticism from them is if I’ve dulled down the spice or used a milder pepper but, it’s just because I’ve got small kids that have to eat everything I film and post. My wife and I like our food spicy as hell and it doesn’t take a rocket scientist to realize any ingredient can be substituted for individual specific tastes.