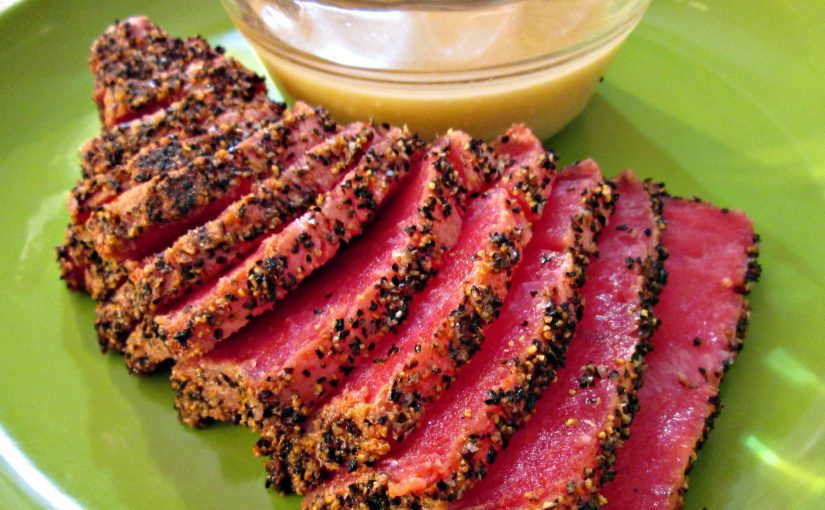 There are, literally, hundreds of different ways to prepare Ahi Tuna but I like mine Seasoned and Seared.  That usually means that dry ingredients are applied, on all sides, to a cut of Raw Ahi Tuna then cooked and “seared” in a dry frying pan.  Ingredients vary but spices generally get the best results, rarely, herbs are ever applied.  But, one of the easiest ways to make this appetizer is to keep it simple and season with Kosher Salt and Black Pepper. The best part about this Ahi tuna recipe is that it comes with a fantastic Wasabi Vinaigrette that has a sweet Soy Sauce and Sesame Oil influence.  Tell me that doesn’t sound superb!  Sushi fans alike come running for this appetizer anywhere it’s served.  I’ve seen similar recipes served at The Outback, Cheese Cake Factory and P.F. Chang’s even.  All of which have their own unique style.  I think that this one is the easiest to do and that anyone the loves tuna is going to like it.

Watch the short video tutorial and I’ll show you exactly how to make this amazing Seared Ahi Tuna and Wasabi Vinaigrette. Chili Oil is made about once a month, in a large Chinese Restaurant I use to work for, and this literally is the way it’s done.  It’s very straight forward and easy to make.  Of course the Restaurant required more volume so I’ve Dumbed this recipe down quite a bit just to give you what you need for your kitchen.  You can use this oil to spice up many of you’re favorite recipes and it can be added through out the cooking process or served as condiment for individuals to add to their specific tastes.

To make Chili Oil, combine Oil add Red Chili’s in a pan and Heat Oil to 180 degrees Fahrenheit for approximately 5 minutes, then kill the heat and let it rest 2 to 3 hours before straining.  Other ingredients can be added, if you want more flavor than just the heat.  Garlic and Ginger are great examples but the possibilities are endless.

Poor the oil into your favorite receptacle or mason jar for safe storage.  On a side Note, this can irritate your eyes when it’s cooking, so it’s not a bad idea to cook this outside if you have an outside burner on a barbecue or something.  And if you want more potency, crush the red chili’s up and cook with the lid off until there is a Red hue to the Chili Oil.